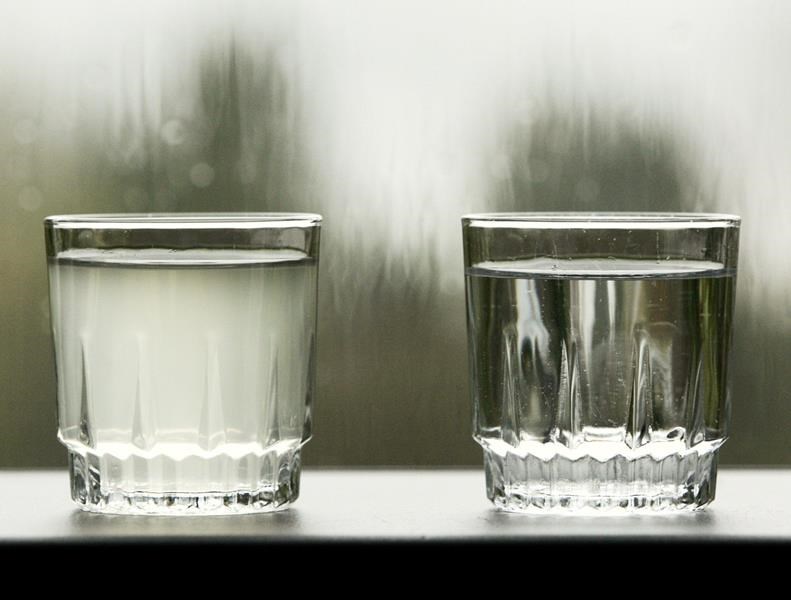 A glass of filtered water, right, is shown next to a glass of tap water in North Vancouver, Friday, Nov. 17, 2006. (THE CANADIAN PRESS/Chuck Stoody)

WINNIPEG — Many drinking water systems in Manitoba are not licensed and lack a properly certified operator, the province’s auditor general said in a report Monday.

The review by Tyson Shtykalo points to water-related health disasters in other parts of the country and urges the provincial government to boost its oversight.

“Within the last 20 years, an E.-coli outbreak in Walkerton, Ontario. killed seven people and made more than 2,000 people ill. Another outbreak in North Battleford, Saskatchewan, made thousands of people ill,” said the 53-page report.

“These events remind us that we are not immune from the dangers of unsafe drinking water, and that ongoing vigilance is essential.”

The audit looked at some of the 1,185 licensed water systems across Manitoba. Many are smaller, so-called semi-public systems with fewer than 15 connections — mostly rural wells that serve homes, restaurants, schools and businesses.

The auditor general’s office found that about 40 per cent of the water systems were operating without a licence, either because they had not yet been issued one or had applied for a licence renewal and were awaiting confirmation from the province.

“Those not yet licensed are of most concern as licences communicate the regulatory requirements the system operators must meet to ensure the water is safe to drink,” the report said.

The audit also found that roughly half of the water systems in the province did not have a water systems operator with the proper level of training.

“Although many of these systems were very small, it is important that all water systems, no matter the size, have an operator who has received appropriate training, and understands the system and safety requirements that must be met under the licence,” Shtykalo wrote.

Enforcement is another challenge raised in the audit. The number of water systems has almost doubled in the last five years, but the number of government staff assigned to licensing and monitoring the systems has dropped slightly, Shtykalo said.

The report made 18 recommendations, such as addressing backlogs, improving information technology, and boosting the frequency of inspections.

The Progressive Conservative government said it has already taken steps to reduce the backlog in issuing and renewing licences, and committed to the other recommendations.

“A co-ordinated effort between (several departments) is already underway and will demonstrate commitment to continuous improvement of our management of drinking water and bolster public confidence in the continued safety of our drinking water,” the government said in a statement attached to the report.

“Their cuts to the number of inspectors of current systems and water infrastructure, while issuing more licenses, means that there is less oversight to ensure compliance with regulations,” NDP infrastructure critic Matt Wiebe said in a statement.