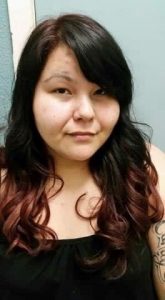 Jennifer Dethmers is shown in a handout photo. Dethmers, who died in a weekend collision that also sent her baby to hospital, is being remembered as an amazing new mother who contributed to the community. (THE CANADIAN PRESS/HO-Jessica Bird)

WINNIPEG — A woman who died in a Winnipeg collision that sent her nine-month-old baby and several other people to hospital is being remembered as an amazing new mother who contributed to the community.

Jennifer Dethmers, who was 30, died on Saturday when the van she was in was hit by a truck, which police say was speeding away after officers attempted to pull it over.

Dethmers’s partner and stepdaughter were also taken to hospital.

Police say they were in critical or serious condition.

The two people in the truck were also hospitalized.

Family of Dethmers are organizing a vigil for Tuesday at the spot where the collision happened. Relatives say they want to share memories of the kind, compassionate mother.

“She was an amazing loving woman who would drop anything for her family and friends,” said her cousin Jessica Bird. “She was a new mother to an amazing, beautiful baby boy.”

Police Const. Rob Carver said police officers had tried to pull the truck over in a traffic stop, but “the vehicle took off at a high rate of speed.”

Within seconds, it collided with a van in an intersection about two blocks away, he said.

Manitoba’s police watchdog has taken over the investigation. For that reason, Carver said, he was unable to provide details about how the officers attempted to pull the truck over or the speeds reached by the fleeing vehicle.

Generally, it is against police protocol to pursue a fleeing vehicle in the city because the risks are high, he said.

“Fleeing vehicles present a huge risk to not only people in the vehicles, but people in the community, innocent bystanders, as well as our own officers.”