By Joan Bryden and Lee Berthiaume, The Canadian Press 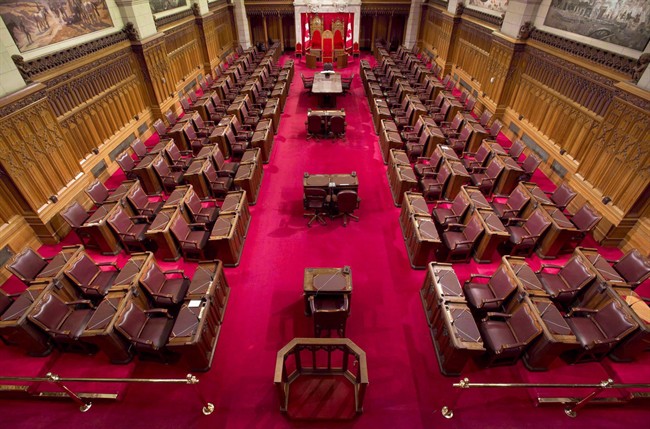 The Senate chamber on Parliament Hill is seen May 28, 2013. (THE CANADIAN PRESS/Adrian Wyld)

OTTAWA — After being rushed through the House of Commons in a single day, a bill authorizing new benefits for workers impacted by the COVID-19 pandemic has hit a speed bump in the Senate.

Sen. Marc Gold, the government’s representative in the Senate, was denied leave Wednesday to have the upper house deal with Bill C-4 on Thursday, after having an opportunity to question Finance Minister Chrystia Freeland and Employment Minister Carla Qualtrough about it.

Senators may yet hear from the two ministers on Thursday but they will not begin debating the legislation until Friday, barring further holdups.

Sen. Scott Tannas, leader of the 13-member Canadian Senators Group, said he was among a number of senators who denied the unanimous consent Gold needed to proceed with the bill Thursday.

And he said they did so to protest the fact that Gold has still not proposed a way for the Senate to resume its full functions during the pandemic, with all senators able to participate in debates and votes, either in person or virtually, as is being done in the House of Commons.

Since mid-March, the upper house has met only periodically for single-day sittings to pass pandemic-related emergency aid bills. For those sittings, only a small number of senators have attended, leaving the rest with no role to play.

The situation has been particularly hard on senators from Atlantic provinces, which have imposed travel restrictions on their residents during the pandemic.

“We’ve got to be the last chamber in all of the Westminster system that is still operating with no hybrid (format) or not even a glimmer of it,” Tannas said in interview.

He said senators are also frustrated that the government is pressuring them to approve billions worth of aid legislation in a matter of hours and then go home and do nothing until the next emergency bill comes along. In the case of Bill C-4, he questioned the urgency, noting that applications for one of the proposed new benefits aren’t scheduled to open until Monday, and not until Oct. 11 for the other two.

“We just thought today was a good day to provoke some conversation and see if we could get to the bottom of it and get a resolution, having satisfied ourselves that this would not put anybody in jeopardy in terms of the extension of benefits,” Tannas said, adding it’s still possible to pass the bill on Friday or to hold a special weekend sitting to get it done.

Tannas said Gold has a motion for hybrid Senate sittings “ready to go” but has not introduced it because he wants to arrive at a consensus with all groups in the 105-seat upper house. That’s been stymied by the 21 Conservative senators, whom Tannas said continue to want “everybody to be in the chamber and, if you can’t be in the chamber, then you should take a sick day.”

A motion for hybrid sittings can be passed without the Conservatives and Tannas said no one can figure out why Gold hasn’t tried to proceed without them.

“I don’t know why. He knows full well that 80 per cent of us are ready to vote on it today.”

Sen. Yuen Pau Woo, leader of the largest caucus group in the chamber, the Independent Senators Group, said his members are equally frustrated and mystified about why Gold has not introduced a motion on hybrid sittings.

“This issue of hybrid sittings has been discussed for many months,” Woo said in interview, adding that he supports Tannas’ efforts to force the issue.

“Many of us were expecting that there would be a motion this week … It surprises many of us that we haven’t seen such a motion being tabled.”

In a written statement, Gold said that he “fully supports the implementation of a hybrid approach as soon as the Senate’s internal administration reaches a state of operational readiness.”

He said “much progress” has been made to make hybrid sittings possible this fall but declined further comment since discussions among Senate leaders are “ongoing.”

Opposition MPs have expressed similar frustration about the short time they’ve been given to deal with emergency aid legislation.

Conservatives and Bloc Québécois MPs voted Tuesday against the government’s bid to fast-track Bill C-4 through the Commons. With the support of the NDP, the government was nevertheless able to speed up passage of the bill, which was eventually approved unanimously in the wee hours of Wednesday morning.

Conservative and Bloc MPs took shots Wednesday at the NDP as they explained why they supported the bill after vigorously opposing the manner in which it was sped through the Commons.

“This is a minority government, not a coalition government,” Conservative House leader Gérard Deltell said. “We have to keep that in mind and I hope that the NDP will continue to do their job. They are there as an opposition party and they have to do opposition work in the House of Commons.”

Deltell said Conservatives ultimately supported the bill because, “in the big picture, we are talking about Canadian workers.”

Yet both he and Deltell continued to complain about the fast-tracking, with Blanchet saying the Liberals’ decision to rush the aid package was a blow to democracy, robbing MPs of a chance to analyze and possibly improve the bill.

“We were not given time to proceed with the analysis and the improvements that this law might have received because the government decided for some particular reasons or purpose that … it was important enough for the government to impose the ‘shut-up’ procedure,'” Blanchet said.

NDP Leader Jagmeet Singh shot back that New Democrats supported the bill only after forcing the government to make changes that will help millions more Canadians. And he mocked the other two opposition parties for complaining that the NDP “fought to get help to people too quickly.”

“We fought and we won for Canadians,” Singh said.

“The Conservatives and the Bloc have done nothing. Throughout this pandemic, there’s not a single win they can point to that they’ve helped out Canadians. I think that’s a pretty bad record.”

All opposition parties have blamed Prime Minister Justin Trudeau for creating the need for the speedy approval of the bill by proroguing Parliament for a month, during which time it could not deal with anything.

Bill C-4 replaces the Canada Emergency Response Benefit, which came to an end last weekend after helping almost nine million Canadians weather the pandemic. The CERB is being replaced with a more flexible and generous employment insurance regime and, for those who still don’t qualify for EI, a new Canada Recovery Benefit.

The bill also creates a new sick-leave benefit and another new caregiver benefit for those forced to take time off work to care for a dependent due to the pandemic.

At the behest of the NDP, the government has increased the proposed new benefits to $500 per week from the originally proposed $400, aiming to see that no one receives less than they were getting under the CERB.

It has also expanded the eligibility criteria for the sick-leave benefit so that it applies not just to individuals who contract COVID-19 but also to those with underlying health conditions or other illnesses, including the flu or the common cold, that makes them more susceptible to COVID-19.