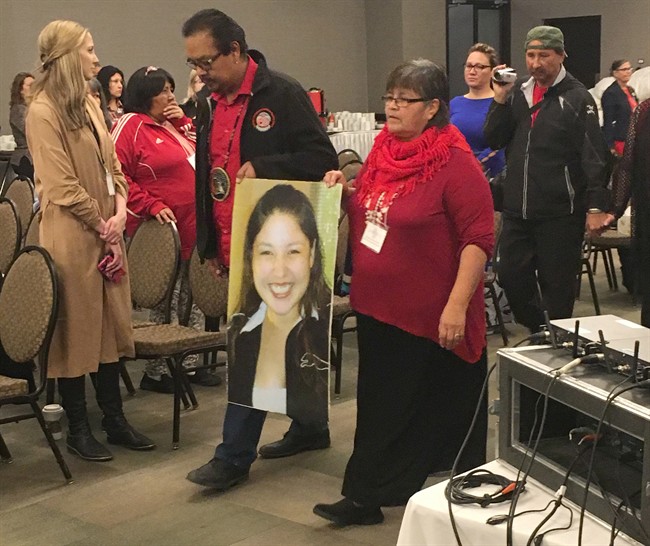 Bernice Catcheway, right, carries a picture of her daughter, Jennifer Catcheway, into a hearing of the national inquiry into missing and murdered women in Winnipeg on Friday, Oct. 20, 2017. (THE CANADIAN PRESS/Steve Lambert) 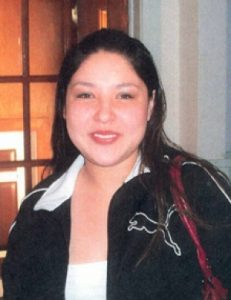 WINNIPEG — Efforts to find closure for the family of Jennifer Catcheway are getting a financial boost from the Manitoba Metis Federation.

The MMF announced Thursday a $10,000 donation to the reward fund for information leading to the woman, who has been missing since June 19, 2008.

Jennifer’s parents, Bernice and Wilfred, have been offering a $10,000 reward since she went missing. The MMF’s contribution doubles that amount.

“The loss of a child is a terrible tragedy and the Catcheway family has been living this tragedy for 12 years now,” said MMF president David Chartrand.

“They have never given up the search and they believe there is someone out there who has information that can lead them to their daughter. At the Manitoba Metis Federation, we want to help them end their search and bring Jennifer home. We hope that now $20,000 will encourage people to speak out.”

“This donation is appreciated and it helps to put Jennifer back out there. Sadly, for missing women, it’s out of sight, out of mind, and people forget about them,” Bernice said.

New billboards with the updated reward amount will also be going up, with additional costs covered by the MMF.

The family has recently been looking in Duck Bay and Grand Rapids south based on tips from the public.

Anyone with information is urged to contact Manitoba Crime Stoppers at 1-800-222-TIPS (8477) or Bernice Catcheway on Facebook.