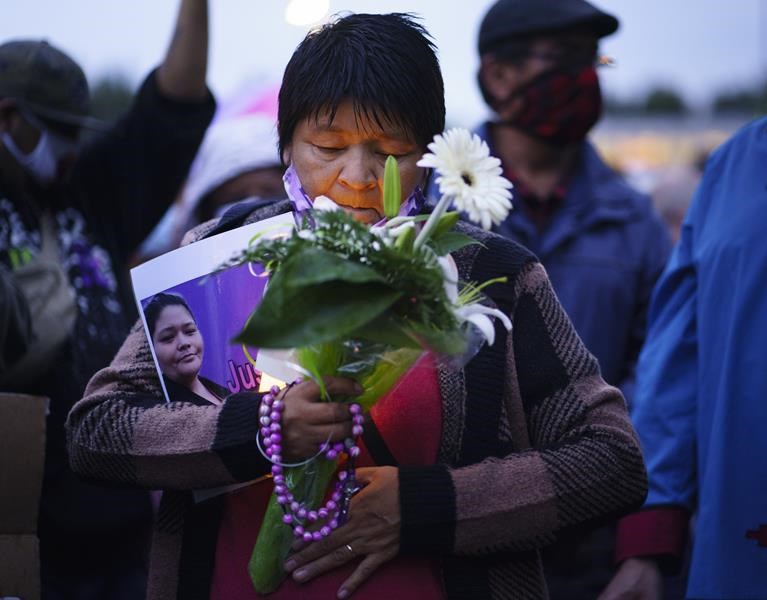 Diane Echaquan Dube, mother of Joyce Echaquan, attends a vigil in front of the hospital in Joliette, Que. on Tuesday, September 29, 2020. (THE CANADIAN PRESS/Paul Chiasson)

JOLIETTE, Que. — The family of an Indigenous woman subjected to insults as she lay dying in hospital said Friday it will hit back hard against a racist system it accuses of killing her.

Members of Joyce Echaquan’s family, community members and lawyer Jean-Francois Bertrand announced a series of legal actions during a news conference at the native friendship centre in Joliette, Que., northeast of Montreal.

The family said it will launch a lawsuit against the Joliette hospital and file complaints with the province’s human rights commission and with the police. They said they hope criminal charges will follow.

“I’m convinced my partner is dead because systemic racism contaminated the Joliette hospital,” her husband, Carol Dube, said. “It killed my partner.”

Dube was overcome with emotion and struggled to get through his speech at times.

“I’m here today to reclaim justice,” Dube said, choking back tears. “I am here for my wife, Joyce Echaquan, and her seven children who will never again see their mother, who are the biggest losers in all this.

Before her death, the 37-year-old Atikamekw mother filmed herself from her hospital bed Monday while she was in clear distress and pleading for help. Two female hospital staff can be seen entering the room and are heard insulting Echaquan, who had been admitted with stomach pain.

The video circulated widely on social media and prompted widespread indignation across the country.

On Thursday, the regional health authority confirmed that a second health-care worker had been fired in connection with the treatment of Echaquan, a mother of seven.

Quebec’s coroner’s office is investigating Echaquan’s death as is the regional health authority.

Bertrand, a Quebec City-based lawyer, said the family intends to “take all — and I mean all — the recourse the law puts at our disposal” to obtain justice for Echaquan.

“We’re going to hit hard because we want to give the example that it has to stop.”

The family, he said, is also filing a complaint with the province’s nurses order so that the nurse in the video loses her licence. Family members called for a public inquiry into the treatment of the Atikamekw people at the Joliette hospital and said they want intervener status at a coroner’s inquiry into Echaquan’s death.

Paul-Emile Ottawa, chief of the Atikamekw council in Manawan, Que., called Friday for Premier Francois Legault to take immediate measures to make sure what happened to Echaquan doesn’t occur again. He said he wants a nation-to-nation meeting with the premier.

Ghislain Picard, chief of the Assembly of First Nations Quebec-Labrador, did not attend a Friday morning meeting he had scheduled with Legault.

In a tweet, Picard later explained he did not cancel the meeting but could not meet with the premier without the Atikamekw chiefs present. “Matter of respect for the nation that expects nothing less.”

During a news conference Friday, Legault repeated his long-held opinion that systemic racism does not exist in Quebec.

“When we talk about systemic racism, for me, it’s in relation with the Black people in United States — for a reason we know,” he said. “I don’t see that in Quebec, but, for sure there is some racism against the First Nations in Quebec and I want to fight, I want to be the government who will do the most actions … against racism against the First Nations.”

Bertrand challenged Legault to “stop making promises” and commit to taking concrete actions to address the situation “as of tomorrow.”

“We need more than nice words, we need change,” the lawyer said.