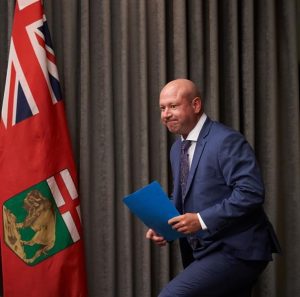 WINNIPEG — A little more than six months into Manitoba’s COVID-19 state of emergency, the province’s chief public health officer says there have been lessons learned in terms of fighting the novel coronavirus and of keeping the public on track about pandemic precautions.

“People really want and appreciate black-and-white messaging, and it’s just so difficult to do,” Dr. Brent Roussin said in an interview.

“There’s always going to be those levels of grey.”

At the start of the pandemic, people who tested positive tended to be older and travel was the top source of transmission. The province ordered businesses to close and required travellers to self-isolate after entering Manitoba.

The active case count plummeted. Even after some businesses started reopening with capacity limits, Manitoba seemed to have things well in hand. At one point in July, there was only one active case in the province.

“I would never turn away a zero (new case) day,” Roussin said, reflecting on the summer lull. “But our goal can’t be to eradicate it, because you just can’t eradicate a virus like this — not unless you have a vaccine.”

After more openings and loosened travel restrictions, numbers started spiking in late July, first in western Manitoba and later in Winnipeg. In recent weeks, cases have involved younger people, often in bars and restaurants. Instead of travel, close contact — being within two metres of a positive case for more than 10 minutes — became the top method of transmission.

Roussin was asked whether the importance of keeping a small bubble and limiting close contact with people outside a household got lost in the mix of the government’s messaging about washing hands and wearing masks in public, combined with daily alerts about possible public exposures.

“It’s really difficult to articulate that and have people absorb that,” he said.

“It’s only natural that people wanted to get back to the things they enjoy and were tired of having to hear about this virus.”

New messaging may focus on that small bubble, he said, especially among young people who have not shown severe outcomes from the virus and might feel a sense of immunity.

“The messaging has to deal with putting other people at risk, not stopping mingling but reducing it, and then using a lot of the other measures in place.”

The government’s response to the pandemic has also had to shift. Health officials were planning to increase testing sites during the fall flu season, but demand and lineups surged in late summer as the Winnipeg case count spiked and kids returned to school. The province, caught off guard, only recently moved up its plans to open more testing sites.

Roussin said he’s had a lot of negative feedback about the government’s response — both from people who want more restrictions and people who oppose mask-wearing and want all businesses and public venues reopened at full capacity.

But unlike some of his counterparts in other provinces, such as Dr. Bonnie Henry in British Columbia, he has not received death threats.

“I’ve received a tremendous amount of well-wishes, actually, from the public since a lot of these negative stories have been in the news about threats, so that’s much appreciated as well”

Roussin also said he has been supported by the province’s top politicians, and hasn’t faced political interference with his public health orders.

“Definitely not interference. Certainly involvement, as there should be.” he said.

“I don’t have an example of where I said, ‘We really need to do this,’ and we weren’t able to come to some sort of action on it.”