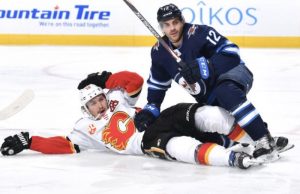 Dylan DeMelo #12 of the Winnipeg Jets keeps Matthew Tkachuk #19 of the Calgary Flames down during the third-period of Game Three of the Western Conference Qualification Round at Rogers Place on August 04, 2020, in Edmonton, Alberta. (Photo by Andy Devlin/NHLI via Getty Images)

The Winnipeg Jets have re-signed defenceman Dylan DeMelo on a four-year contract with an average annual value of $3,000,000 USD.

The 27-year-old was acquired from the Ottawa Senators on February 18 and posted 10 assists and 37 penalty minutes in 59 regular-season games for the Jets and Senators in 2019-20.

The London, Ontario native played in 10 games for the Jets before the season was paused earlier this year.

DeMelo was originally drafted by San Jose in the sixth round (179th overall) in the 2011 NHL Draft.