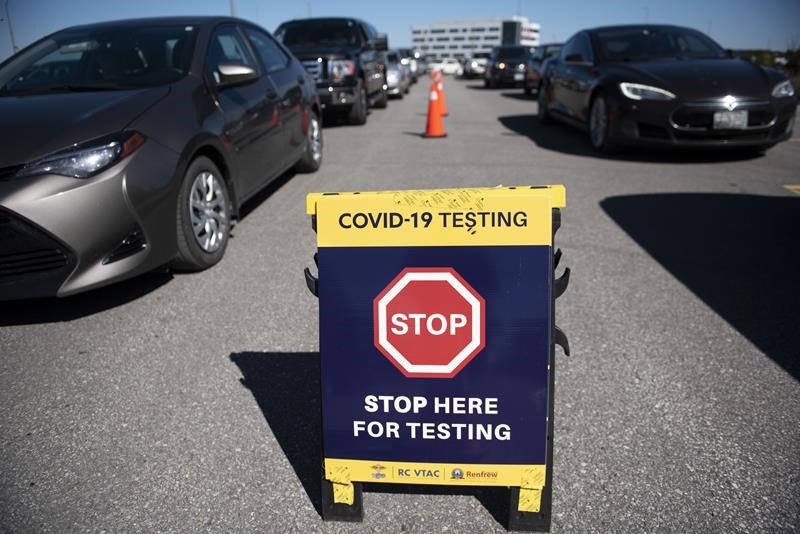 Cars line up to be registered at a drive-through, pop-up COVID-19 test centre administered by paramedics outside the Canadian Tire Centre, home of the NHL’s Ottawa Senators, in Ottawa, Sunday, Sept. 20, 2020. (THE CANADIAN PRESS/Justin Tang)

CALGARY — Infectious disease specialists say a recent surge in COVID-19 cases that surpasses a spike last spring must not be shrugged off as merely a byproduct of increased testing.

“I think minimizing right now is a real mistake,” said Dr. Lynora Saxinger of the University of Alberta.

“People are not wanting to believe that this is a thing, because I think they don’t want to return to the state that we were living in earlier in the year. That’s a dangerous path to take and we should be much more precautionary right now.”

The Canadian Press compiled data posted publicly in Alberta, British Columbia, Ontario and Quebec over one week ending April 21 and another ending Oct. 6 to get a sense of how the two case surges compare.

Daily cases in Alberta were two per cent higher in the most recent period compared with the April week. Ontario’s were 13 per cent higher, Quebec’s were 14 per cent higher and B.C.’s cases were more than triple the mid-to-low, double-digit numbers it experienced in April.

The positivity rate — the percentage of tests that come back positive — in all four provinces has dropped markedly between the spring and fall surges.

Quebec, which averaged around 6,300 daily tests and 930 new cases during the April week, had a positivity rate during that period of about 15 per cent.

In the more recent week, when Quebec had five consecutive days with new cases in the quadruple digits, its positivity rate sat at roughly four per cent.

Ontario, which is dealing with a hefty backlog of swabs waiting to be analyzed, posted an official daily positivity rate of two per cent for Oct. 7, down from the roughly six per cent range it had in mid-April.

Early testing was largely limited to people with a handful of specific symptoms and those who came into close contact with them. Tests are now available to a much broader portion of the population and many more mildly symptomatic or asymptomatic cases are being found.

“The threshold for what we consider high on per-cent positivity probably should be considered different now than it was in the spring,” said Saxinger.

Dr. Craig Jenne, an infectious diseases researcher at the University of Calgary, noted that testing among people with no suspected exposure or symptoms in Alberta over the summer unearthed very few new cases. The province has since tightened its asymptomatic testing criteria, limiting it to those at higher risk or with upcoming travel.

“We are still screening asymptomatic people, but these are people we have a reason to believe were exposed and that seems to capture most of the cases in the community,” he said.

“So we have to always be reacting to what is coming down the pipe and not necessarily what’s happening today.”

In recent weeks, testing has been relatively stable while cases have trended up.

“There’s been a definite increase in the number of people who are infected. It isn’t just because they’re testing more,” said Dr. Ameeta Singh, an infectious diseases specialist at Edmonton’s Royal Alexandra Hospital and the University of Alberta.

Hospitalization trends are a lagging indicator that experts are eyeing with concern.

In Ontario, for instance, hospitalizations began creeping into the triple digits about two weeks ago and as of Friday, there were 225 people hospitalized.

“Definitely that’s when we start to become a bit more alarmed,” said Singh.

“That’s kind of the tip of the iceberg. It tells you that there’s way more community transmission than you might expect.”