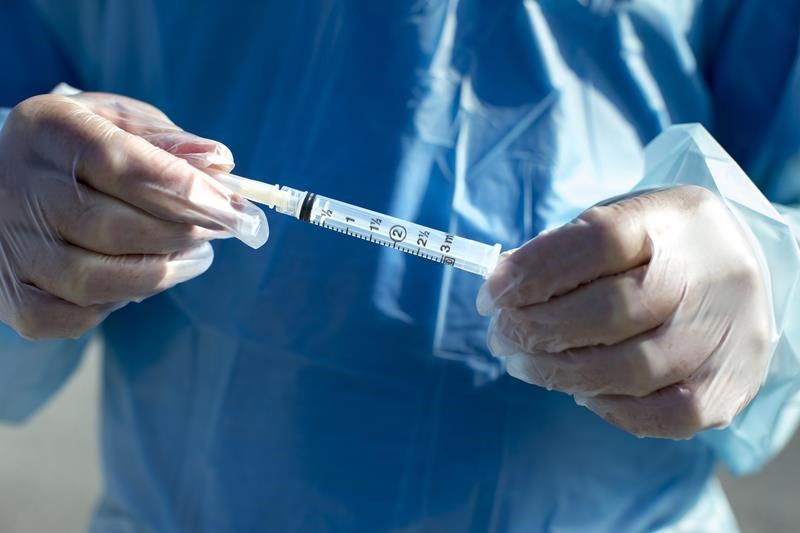 A needle and syringe used to administer an influenza vaccine are shown in Virgil, Ont., Monday, Oct. 5, 2020. (THE CANADIAN PRESS/Tara Walton)

OTTAWA — Health Canada is in talks with all of the vaccine developers that signed supply deals with the federal government to kick-start the approval process and get COVID-19 vaccines to Canadians as soon as possible.

In the last two months, Public Services and Procurement Canada has signed deals with the makers of six COVID-19 vaccines, that will see Canada spend more than $1 billion to get guaranteed access to between 20 million and 76 million doses of each one if they are approved.

All have to complete clinical trials and be deemed both safe and effective at preventing or lessening the effect of COVID-19, but before they can be used here, Health Canada also has to decide they meet its standards as well.

Normally the Health Canada review would happen after all trials are over, but Dr. Supriya Sharma, the chief medical adviser at Health Canada, said given the heightened need for a COVID-19 vaccine, Health Canada is trying to get the regulatory process done at the same time as the final trials are being completed.

“We’re still talking about months not weeks in terms of timeline and really the ultimate length of the review depends on the data,” she said.

Still, she says normally the regulatory process takes more than a year, and with added resources and expedited timelines, she thinks the first vaccine will be approved in Canada in “months, not years.”

Thus far AstraZeneca is the only company that has applied for Canadian approval, submitting the application and its first scientific results on Oct. 2.

“We are in discussions with other companies about whether or not they’re ready to submit as well,” she said.

Five of the six, including AstraZeneca’s candidate, are now in the third and final phase of clinical trials, and most are expecting their results by the end of the year.

AstraZeneca, Moderna, NovaVax, Johnson and Johnson and Pfizer are also in Phase 3 trials, while GlaxoSmithKline and Sanofi’s vaccine is in Phase 2.

No vaccine has completed Phase 3 trials yet anywhere in the world.

New vaccines or drugs go through multiple stages of trials on humans, looking first to see if they are safe and cause no serious adverse reactions. Each phase adds more people, with usually fewer than a dozen to start, rising to tens of thousands by Phase 3.

Sharma said the international consensus, with which Health Canada agrees, is that no vaccine will be approved unless it is at least 50 per cent effective at preventing COVID-19.

She said, however, the results of the trials of the most promising vaccines show much higher effectiveness than that.

A recommendation on which Canadians would be prioritized to get vaccinated first is expected in a few weeks from the National Advisory Committee on Immunization.

Ultimately provinces and territories will decide who they will prioritize for the vaccine, as it is provincial and territorial health systems that will run vaccination programs in their jurisdictions.

Sharma said to be effective at slowing the spread of COVID-19, between 60 and 70 per cent of Canadians will need immunity, either naturally because they have had COVID-19, or because of a vaccine.

It is not yet known yet how long immunity lasts for people who have been infected with COVID-19.