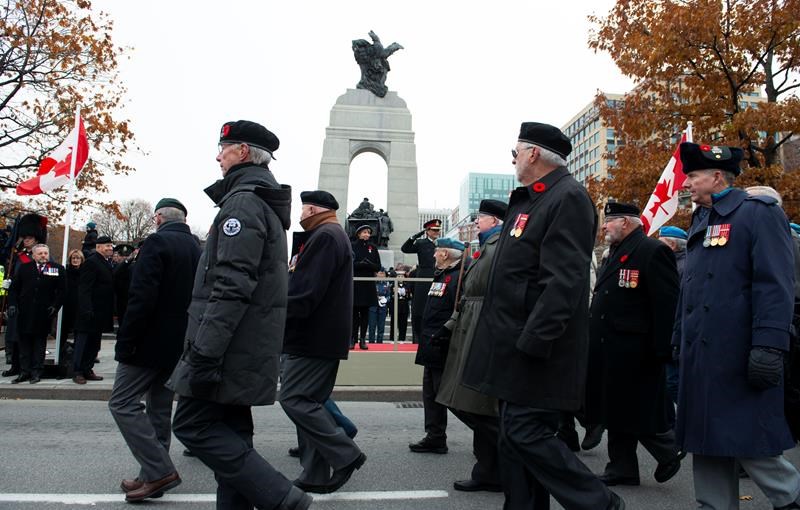 A Remembrance Day ceremony at the National War Memorial in Ottawa on Monday, Nov. 11, 2019. (THE CANADIAN PRESS/Sean Kilpatrick)

OTTAWA — The Royal Canadian Legion is taking the unprecedented step of discouraging Canadians from attending Remembrance Day ceremonies this year as COVID-19 upends the traditional ways of honouring those who sacrificed their lives for Canada.

Legion branches across the country are scrambling to plan stripped-down versions of the annual sombre ceremonies on Nov. 11 as many local governments restrict large-scale gatherings due to the rising number of new COVID-19 cases.

That includes in Ottawa, where as many as 30,000 Canadians gather alongside hundreds of veterans and serving military personnel every year to mark Remembrance Day at the National War Memorial.

This year’s national ceremony will include many traditional elements such as the playing of Last Post and the lament, the singing of In Flanders Fields along with the boom of cannons, prayers and a military flyby, said legion director of communications Nujma Bond.

But some changes due to COVID-19 will be unmistakable, with the decision to cancel the parade of elderly veterans, serving military members and school-aged cadets that has long been a fixture of the event.

The Department of National Defence has decided not to have cadets attend in-person Remembrance Day events across Canada, said spokesman Daniel Le Bouthillier. The involvement of Canadian Armed Forces personnel is also being limited, he added, with decisions made on a case-by-case basis.

The decision to cancel the annual veterans’ parade in Ottawa is particularly striking given the shrinking number of Canadians still alive who served in the Second World War and Korea. Some now in their 80s and 90s have braved the cold for decades to attend the ceremony, but age puts them at high risk from COVID-19.

Instead, only a handful of people will be on hand at the cenotaph, as the Legion asks Canadians abide by local public-health guidelines and watch the ceremony on TV or online rather than in person.

“For the first time ever, we will be discouraging spectators from coming down to the National War Memorial,” said Bond. “It’s most definitely a shame this year that we’re all having to work within the constraints that this pandemic has brought.”

About 30,000 people attend the national ceremony every year, Bond added.

The same reluctant request is being made by legion branches in other parts of the country even as organizers iron out details amid shifting public-health guidelines.

One of those is Legion Branch 5 in Thunder Bay, Ont., whose annual outdoor parade and ceremony typically involves up to 150 veterans, military personnel, cadets and volunteers, and is observed by around 500 people.

“Obviously with the restrictions that are placed on us by the province and the local health unit, we had been down to 100 because we were outside,” said branch president Lester Newman. “We’re still not sure if that’s been completely whittled down again, which would all but stop it.”

(The Ottawa ceremony has the city’s permission for up to 100 people due to the nature of the commemoration, Bond said, “though clearly anything can happen between now and then.”)

Newman, who served 42 years as a naval reservist before retiring as a lieutenant-commander, said he has been attending Remembrance Day ceremonies for decades and that it is “part of my makeup.”

Despite the restrictions in Ottawa and elsewhere across Canada, Bond said the ceremonies will remain unchanged in their reverence paid to Canada’s veterans, and some of the familiar elements.

“And we are very hopeful and invite people to participate in other ways,” she added. “It’s such a key moment for the Legion every year, it’s a key moment for veterans, and for many Canadians.”

Ways to participate include not only watching on TV or online, but wearing poppies once they become available later this month and recognizing two minutes of silence at 11 a.m. on Nov. 11 no matter where people are.

Still, “it is sad that we have to limit the numbers,” said Bob Underhill, vice-president of the legion’s operations in B.C. and Yukon and head of the organizing committee for the ceremony in Vancouver’s Victory Square.

The Victory Square ceremony is believed to be the second largest in Canada after Ottawa’s, with about 20,000 people attending each year. But this year, Underhill said the number is being kept under the local maximum of 50.

“We’re trying to arrange for our bands and soloists to do their part virtually, not to attract people down to Victory Square,” Underhill said.

“We’re going to have our official wreath-laying at the site, but we’re going to try and minimize what we’re actually doing at the site so as to not attract attention and get people gathering because we’re under the 50-person maximum. It’s going to be very different.”