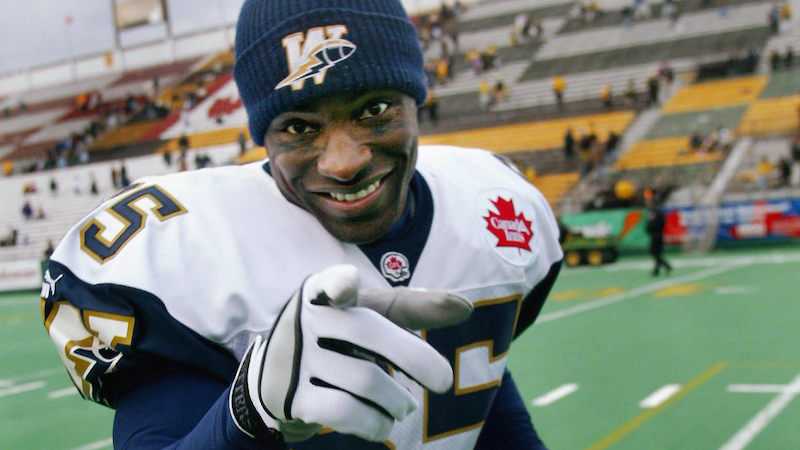 In the Canadian Football League, Labour Day weekend is commonly viewed as the unofficial start of the season despite the fact it’s the midway point for most teams. Thanksgiving weekend is a marker for teams to see where they stand as they position themselves for the upcoming playoffs and a Grey Cup.

None of that is taking place in 2020 because of the COVID-19 pandemic outbreak as the CFL had to face reality and cancel the season. That was in August when Commissioner Randy Ambrosie said in a statement that league governors had decided “in the best long-term interests of the CFL to concentrate on the future.”

While the league has its eye on 2021 let’s look back at a memorable Thanksgiving day Blue Bomber game in what was a largely forgettable season. That was 2005 and while the Winnipeg Football Club was celebrating their 75th year there was very little to celebrate under first-year head coach Jim Daley.

Daley had taken over as Blue Bombers interim head coach after Dave Ritchie’s firing the previous year. However, signs of trouble ahead for Daley were evident during training camp when he talked about the club being in the first year of a rebuild. That didn’t go over well with star slotback Milt Stegall. At 35 years old the ‘Turtle Man’ was in the twilight of his CFHoF career and wasn’t interested in having to go through a 3rd Bomber rebuild and expressed his dissatisfaction with Daley’s comments.

Even with Stegall, quarterback Kevin Glenn and running back Charles Roberts. Bomber fans had little to get excited about. The ‘05 season began with a quartet of losses and an offence that produced zero points in the opening quarter during those 4 games.

That changed in late July. Glenn was back from an ankle injury and the Bombers won a thriller over the Montreal Alouettes 51-46 thanks to a 56 yard Glenn to Stegall touchdown pass with 1:43 remaining in the 4th quarter.

But by Thanksgiving day on October 10th the Bombers, with just 4 wins from 14 games, while not officially eliminated from the playoff chase were close to it. “We’re not mathematically out of it,” a joking Milt Stegall would tell reporters, “but the math we need they haven’t invented it yet.” On that late afternoon fall day, the Bombers were home to the runaway leaders of the West Division the BC Lions who were on the verge of clinching first place with 11 wins.

In the days leading up to the game, the WFC had been celebrating their 75th anniversary and were debuting new predominately gold jerseys that certainly had fans somewhat excited.

In fact, it’s hard to really know what the 22,630 fans who showed up at the stadium expected considering the teams contrasting win-loss records. A Blue Bomber victory? That seemed out of the question.

The game started as many expected when the Lions recovered a fumble in the Winnipeg end zone for an early touchdown. However, by the end of the opening 15, the game was tied as Glenn tossed his first touchdown pass of the game. Surprisingly Glenn never looked in Stegall’s direction the entire opening quarter. That would change before half-time.

Stegall’s frustration was evident late in the 2nd quarter. He threw up his hands in frustration after a play in which he was wide open behind the Lions’ secondary and Glenn didn’t see him. Kevin wouldn’t make that mistake the rest of the game. One play later Stegall was behind coverage again and Glenn found him for a 54-yard touchdown tying the score at 14 with 2:43 left before the half.

With the Lions back in front, after the Bombers conceded a safety, Glenn and Stegall hooked up for a 2nd touchdown from the Lions’ 10 with seconds left as the Bombers headed to the dressing room up 21-16. On the play, Milt had easily separated himself from BC’s Tony Tiller and was wide open near the back of the end zone when he caught the ball. “I fell for the vet’s move,” Tiller would say after the game.
“It wasn’t nothing I didn’t see on film.”

What Tiller had seen on film was what Milt called his patented dead legs. “I’m not the fastest player but what I do is drag my legs as I get close to the defensive back and when he slows down I run right by him.” Lions star receiver Geroy Simon added later “He’s not a legend for nothing.”

The Bombers expanded their lead in the 3rd quarter but only by a point, 29-23, but early in the 4th they would enjoy their first double-digit advantage as Stegall would burn Tiller for the 3rd time and was nearly 10 yards ahead and didn’t break stride as he cradled another ball from Glenn and easily raced to the end zone for a 69-yard score. Three passes for 133 yards and 3 touchdowns and the best was still to come. “They think he can’t run,” Simon would say after the game. “I’ve been telling them all week he’s one of the fastest guys in the league, behind me.”

It was superior conditioning that kept Milt a step and then some ahead of more youthful defensive backs. “They may run a 4.3 forty [yards] while I’m about 4.4-4.5. The difference is as the game goes on the slow down while I can maintain my speed for an entire game.”

That was clearly the case when Glenn looked in Stegall’s direction again as the two put a Blue and Gold bow ribbon on a rare victory. This time they scrimmaged from their nine-yard line and once again Stegall would get himself in the open. He caught Glenn’s pass at the 35 and outran both Tiller and veteran Baron Miles for the next 75 yards without either laying a hand on him for a 101-yard touchdown. 4 receptions – 4 touchdowns and a career-best 234 yards in a stunning 44-23 victory for the greatest Blue Bomber of them all.

Leave it to former Bomber legend Chris Walby to have the best line of the day. Now working as a colour analyst for the CFL on CBC broadcast. Walby told viewers what was going through Milt Stegall’s head after his 4th TD. “He’s saying If this is a dream please don’t let me wake up.”

“That was his best outing ever?” Glenn was told after the game. “I just hope when he goes into the hall of fame he mentions Kevin Glenn was the quarterback when he had his best outing, and, if they show clips, they just show clips of me throwing the ball to him. That’s all I want.” Glenn also had a game to remember with 15 completions for 410 yards and 5 touchdowns.

Meanwhile, a more subdued Stegall said to the TV audience on CBC. “I was in the right place at the right time.” Milt also reached out to Tiller during the interview telling Tiller he had done fine and that it was just little things.” Like Stegall — Tiller also lived in Atlanta — and the two would end up working out and training together in the offseason.

The victory over the Lions was the Bombers last that year as they finished last in the West with a 5 and 13 record that would result in Daley’s firing.

Stegall’s most memorable game could have included a 5th touchdown but he dropped the ball. Laughingly saying to this day that he did it on purpose because he knew he wouldn’t have scored.