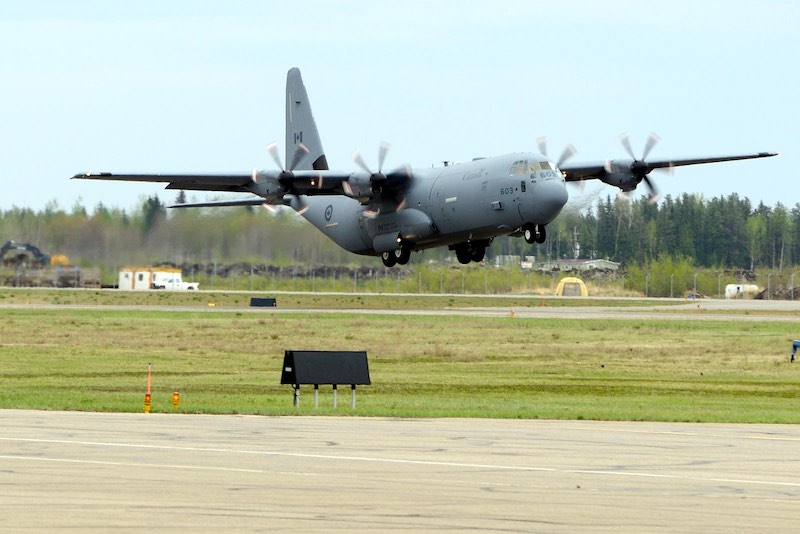 A CC-130J Hercules aircraft from the Air Task Force – Forward takes off from the Fort McMurray airport as it provides airlift to emergency services personnel during a mission to provide assistance to the Province of Alberta during wildfires near Fort McMurray on May 9, 2016. (MCPL BRANDON O’CONNELL / 3 CDN DIV PA)

WINNIPEG — The Royal Canadian Air Force is celebrating the 60th birthday of the “Mighty Hercules” with flyover activities.

Winnipeggers can look up to the sky on Tuesday as the H-model Hercules takes off from 435 Transport and Rescue Squadron, 17 Wing Winnipeg.

To mark the milestone birthday there will be a flypast with the Hercules followed by F-18 fighter aircraft that the Hercules has the capability to refuel in-flight.

Weather permitting, the flight schedule will be as follows:

Congratulations to our neighbours at the @RCAF_ARC who celebrated the 60th anniversary of its use of the C-130 Hercules with a special flypast this morning. #YWG is proud to share the airfield with the air force and support its operations. pic.twitter.com/Zevg3CGNpd

← Previous: 54 New Cases of COVID-19 in Manitoba on Sunday Next: New Support Programs Begin for Canadians Who Missed Work Due to Pandemic →
Tags: Air Travel | Winnipeg