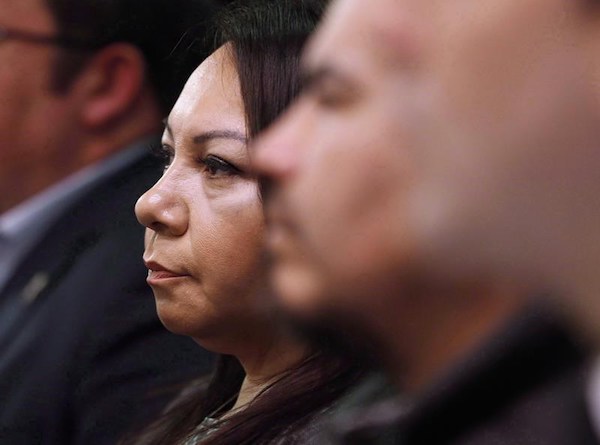 Sheila North, then-grand chief of Manitoba Keewatinowi Okimakanak, listens to an RCMP announcement at a news conference in Winnipeg, Friday, March 18, 2016. North’s mother, a First Nations elder, says her symptoms were initially ignored and she was questioned about alcohol use during a stay at a Winnipeg hospital, where she was brought by her daughter on Sept. 6. THE CANADIAN PRESS/John Woods

WINNIPEG — A First Nations elder says her symptoms were initially ignored and she was questioned about alcohol use during a stay at a Winnipeg hospital.

Sadie North, 72, said she was appalled at some of her treatment during a four-day stay at Grace Hospital. She was there for cellulitis, a bacterial infection, on her leg.

She said she believes her experience is an example of anti-Indigenous racism in the health-care system.

“I wouldn’t want anyone to face what I faced,” she said at a news conference on Friday.

Kellie O’Rourke, the hospital’s chief operating officer, said staff have been in contact with North and they are “sincerely sorry for her experience.” She added that the dialogue will help the hospital learn and improve care for all patients.

“I want to be clear: unconscious bias, discrimination and racism have no place in our health-care system or in our hospital,” O’Rourke said in an emailed statement.

North is from Bunibonibee Cree Nation in northern Manitoba, but has lived with her daughter in Winnipeg for the past five years. The elder was taken to the hospital on Sept. 5 because she was looking extremely ill at a family picnic. She could barely walk and was having difficulty holding her head up.

Her daughter, Sheila North, is the former grand chief for Manitoba Keewatinowi Okimakanak, an organization that represents northern First Nations. Sheila North said she was not allowed to stay with her mother due to COVID-19 restrictions even though her mother’s first language is Cree.

The elder said the original clerk who checked her in to the hospital was dismissive of her illness. She was told to sit and wait and didn’t get help to walk even though she was struggling.

“I got worse and I caught myself, my head was going backward,” the elder said. “And I remember I vomited on both sides and no feelings at all on my arms. That’s all I remember. And there was no one to help me.”

Sadie North said after she vomited on herself, she was finally put on a stretcher and treated.

A few days into her hospitalization, Sadie North said a doctor was accusatory when he asked about alcohol use, even though she does not drink.

Sheila North said when her mother was released from hospital on Sept. 9, the elder began to speak with family about what happened inside the hospital. They were outraged.

“People like my mom shouldn’t be made to feel like she had to defend herself when she’s very sick,” Sheila North said.

Sheila North said she filed a complaint to the hospital and was told there was ongoing cultural training among staff. She said she will also be filing a complaint with the provincial college of physicians on behalf of her mother. The family has called for the clerk’s and the doctor’s resignation.

“I hope the cultural training does continue, but it’s not good enough,” Sheila North said. “People should lose their jobs if they are being racist and they don’t have the right attitudes.”

Federal ministers were holding an emergency meeting Friday with Indigenous leaders and health professionals to discuss racism in health care. Last month, Joyce Echaquan, an Indigenous mother of seven, used her phone to livestream hospital staff using racist slurs against her as she lay dying in a Quebec hospital.

Sheila North pointed to the case of Brian Sinclair, a 45-year-old Indigenous man who died of sepsis in 2008 after sitting in a Winnipeg hospital in his wheelchair for 34 hours. Later, it was discovered that staff assumed he was homeless or intoxicated.

Sheila North said Indigenous people are still facing that type of stereotyping in the health system.

“People assume that our sick loved ones are doing this to themselves.”