Manitoba Bill Would Make It Easier to Fire Striking Workers, Decertify a Union 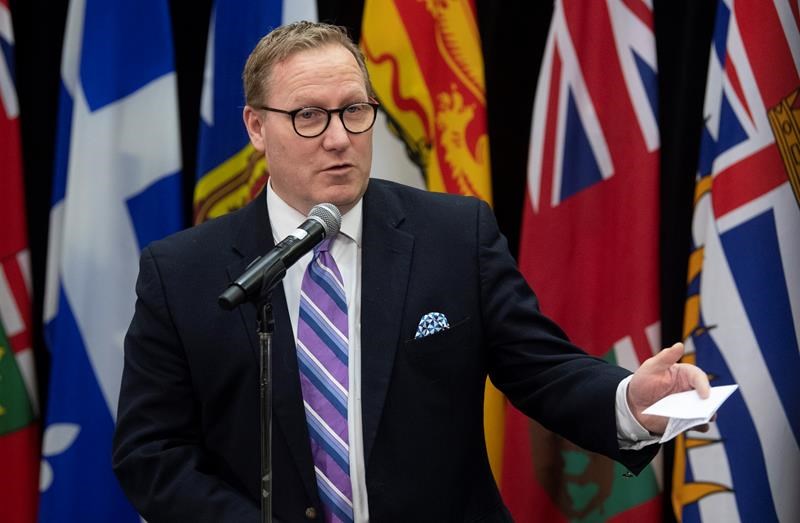 Manitoba Finance Minister Scott Fielding speaks with the media before a meeting with federal and provincial counterparts in Ottawa, Tuesday, Dec. 17, 2019. (THE CANADIAN PRESS/Adrian Wyld)

WINNIPEG — Manitoba’s Progressive Conservative government is planning substantive labour law changes that would make it easier for employers to fire striking workers as well as end a long-standing requirement that strikes or lockouts go to binding arbitration.

Labour leaders and the Opposition New Democrats say the changes would prolong labour disputes and gut workers’ rights, but Premier Brian Pallister says he is simply levelling the playing field.

“I think we’re tilting the table back to balance,” Pallister said Thursday.

“I think the system we inherited (from the former NDP government) was biased one direction, so we’re looking to make it equitable and fair.”

The Labour Relations Act currently allows either a union or employer to get binding arbitration hearings after a certain time period of stalled contract talks, a strike, or a lockout. The provision was enacted by former NDP premier Gary Doer two decades ago to nudge both sides in a labour dispute to work toward a settlement.

A bill before the legislature would only continue the binding arbitration requirement for initial collective agreements when workers unionize.

Opposition NDP labour critic Tom Lindsey said that change would allow talks on subsequent collective agreements to go on for a long time.

“It means that bad employers can just drag it out forever and starve the union workers either back into a bad collective agreement, or starve them into breaking the union,” Lindsey said.

Another proposed change would affect a clause that says employers can refuse to reinstate workers due to strike-related misconduct if the action constitutes just cause for termination and resulted in a criminal conviction.

The bill proposes to remove the requirement for a criminal conviction.

Lindsey said that would make it too easy for employers to go after workers for almost any reason.

The bill also proposes lowering the threshold that would trigger a vote on whether to decertify a union in a workplace. If the provincial labour board felt 40 per cent of represented workers wanted to ditch their union, a vote would have to be held. The current law requires 50 per cent.

Another change would allow some people who buy unionized businesses to not be bound by existing collective agreements. The labour board could grant an exemption if a buyer substantially changed the “character” of the business.

The Manitoba Federation of Labour said all the changes hurt workers.

“These changes would align Manitoba with most other provinces in areas such as certification and decertification, as well as refusal to reinstate employees for just cause after a strike,” Fielding said in a written statement.

“No other Canadian jurisdiction has provisions that allow one party to force the other into binding arbitration for a second or subsequent agreement.”

The bill would also require public-sector unions to disclose audited financial statements and salaries of any staff who make more than $75,000 a year.

The bill could be passed into law next spring by the Tory majority government. Lindsey said the NDP will consider strategies to fight the bill.