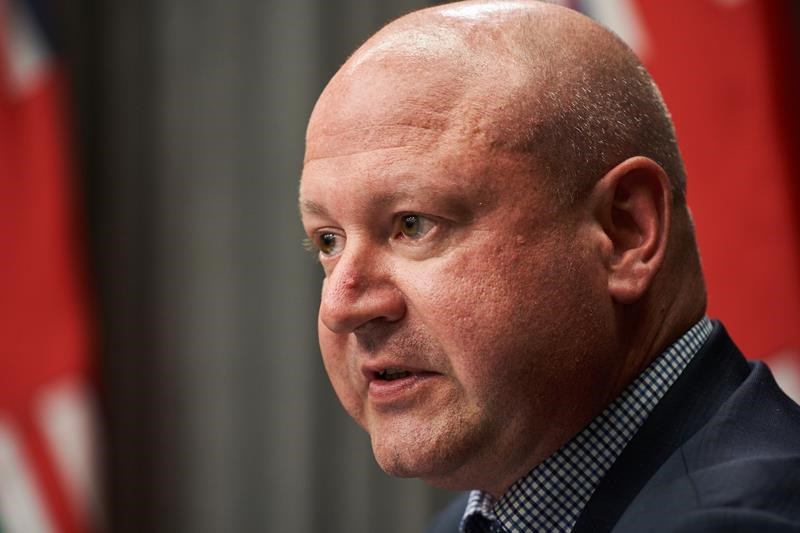 WINNIPEG — Manitoba’s premier says it is maddening that people are still socializing in groups as the province’s top doctor gave a stern warning about a continued surge in COVID-19 cases.

“Grow up and stop going out there and giving people COVID,” Brian Pallister said Monday.

There were 100 new infections Monday. The vast majority are in Winnipeg, which is under enhanced restrictions after a stark increase in infections in recent months.

There have been 4,349 cases in Manitoba since the pandemic began and 2,117 are currently active. A total of 55 people have died — 14 in the last week alone.

“The trajectory is in the wrong direction and if we continue at this pace, we are likely going to see over 5,000 cases by the end of this week,” said Dr. Brent Roussin, the chief provincial public health officer.

He said a woman in her 80s is the 18th person to die at Parkview Place care home in Winnipeg, the deadliest COVID-19 outbreak in the province. More than 90 of the facility’s 220 residents have now tested positive for COVID-19.

“We let the virus off the hook,” Roussin said.

In far too many cases, he warned, people with COVID-19 have more than 50 contacts. Some people are going to work or attending gatherings while having symptoms, he said.

In one outbreak case, a person went to a large faith-based service and then visited a care home. Roussin also described a person who left work because they weren’t feeling well, but decided to go shopping before going home.

Another person who was tested for COVID-19 held a gathering at their home before the results came back and they were positive.

He said it is important people are honest with health-care providers about disclosing if they’ve been in close contact with a COVID-19 case. Roussin said a person was not honest about this history before a medical procedure and it resulted in the entire surgical team needing to isolate for two weeks.

Many of the new cases are linked to Thanksgiving gatherings and Roussin warned that people must be cautious when it comes to Halloween because “nothing we do is without risk.”

“Risk can be transferred to people in very vulnerable settings.”

Chief nursing officer Lanette Siragusa said there is concern over pressures in the health-care system. There are 80 people in hospital and 15 people in intensive care.

“This virus is demonstrating the vicious impact it can have on our most vulnerable,” she said.

Officials have also said an outbreak at Headingley Correctional Centre, just west of Winnipeg, began with a guard who worked for two days at the jail before developing symptoms during his days off. It has since grown to 33 inmates and six staff.

Officials said five staff at other facilities and one inmate at a youth correctional facility have also tested positive.

The Opposition New Democrats and union leaders have been critical of the provincial response to the pandemic in jails, saying it puts inmates and guards at risk.

Justice Minister Cliff Cullen defended the government’s record, adding a comprehensive plan has been developed to deal with the situation.

Inmates and guards are required to wear masks, interactions between people have been limited and instructional videos have been developed for guards and inmates.

Cullen also explained changes to moving inmates and isolating those who test positive, as well as the use of personal protective equipment.

Pallister cautioned the province will remain under restrictions as long as there are people making extremely risky decisions like holding house parties or going out when they are symptomatic.

“These are not rocket-science decisions people need to make, this is common sense,” the premier said.

“I am asking the people of Manitoba, who in very, very small number are disrespecting one another through their behaviors, to smarten up.”