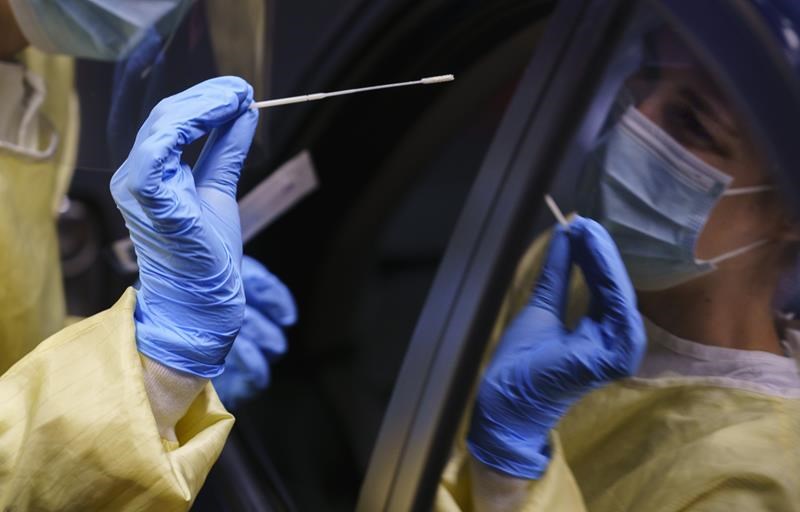 A nurse performs a test on a patient at a drive-in COVID-19 clinic in Montreal, on October 21, 2020. (THE CANADIAN PRESS/Paul Chiasson)

OTTAWA — A new Statistics Canada report says communities with the most visible minorities had the highest mortality rates during the first wave of the novel coronavirus.

The report’s authors say it is more evidence that the pandemic is disproportionately affecting visible minorities, who are more likely to live in overcrowded housing and work in jobs that put them more at risk of exposure to COVID-19.

Other studies have shown visible minorities are more likely to suffer from conditions such as diabetes and high blood pressure, which are considered to make an individual at higher risk for serious illness or death from COVID-19.

The death rates are adjusted for age to account for different age structures in different neighbourhoods.

In Ontario and Quebec, the rates were 3.5 times as high in communities where more than one-fourth of residents identify as visible minorities.

Nearly 8,800 people died in the first wave of the pandemic in Canada, 94 per cent of them in Quebec and Ontario.

Canadian and provincial public health agencies do not collect much data on the race of patients with COVID-19, so Statistics Canada used the national database on deaths and census data on visible minorities and neighbourhoods to compile the report.

Chief public health officer Dr. Theresa Tam, who said early in the pandemic there were no plans to collect race-based data on cases of COVID-19, said Wednesday that finding out who is most affected by an illness like COVID-19 can help drive policy decisions about where to direct resources.

“So under those circumstances, doubling efforts to focus on providing support, whether it’s lab testing, or anything else in those communities, I think would be extremely important,” she said.