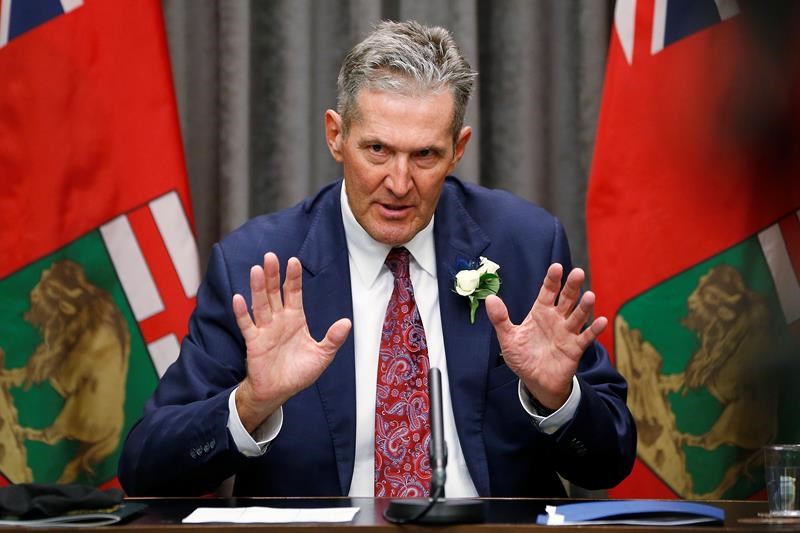 Manitoba premier Brian Pallister speaks to media prior to the reading of the Speech from the Throne at the Manitoba Legislature in Winnipeg, Wednesday, October 7, 2019. (THE CANADIAN PRESS/John Woods)

WINNIPEG — Manitoba’s premier is considering a curfew to curb a surge in COVID-19 infections as doctors sound the alarm about pressures mounting on hospitals and health-care workers.

“I have never seen the emotional and mental stress occurring with my colleagues as I have in the last couple of weeks,” Dr. Kendiss Olafson, an intensive care physician in Winnipeg, said Monday.

Health officials said 75 of 80 intensive care beds in Manitoba were filled with patients Monday — 18 had COVID-19 and, of those, 11 were on ventilators. Some non-urgent or elective surgeries were being cancelled to provide more space.

Olafson, who has been working in intensive care for 16 years, said the current situation is different than anything she’s experienced. As more patients come in and colleagues fall sick, she said, the pandemic is taking a toll, especially since health-care workers know the strain on the system is set to worsen.

Hospitalizations tend to lag a few weeks behind people being initially identified as having COVID-19.

Health officials reported 241 new infections in the province Monday and five more deaths. That followed a weekend with 661 cases and 10 deaths.

A second employee at Winnipeg’s Exceldor poultry plant who tested positive for COVID-19 also died, the company said Monday. An investigation is ongoing to see whether it’s due to the infection.

Doctors Manitoba issued what it called a red alert earlier in the day to encourage all Manitobans to follow public health advice more diligently. The organization that represents about 3,000 practising and retired physicians said there’s concern hospital capacity will be overwhelmed within days.

An open letter to the premier signed by around 200 doctors over the weekend also expressed concern and called for action.

“What we all have in common is our unanimous alarm regarding the COVID­19 crisis in Manitoba,” the letter said.

Winnipeg moved into the red zone on Manitoba’s pandemic response scale on Monday and the rest of the province was elevated to orange.

That means newly tightened restrictions have forced the closure of restaurants and bars in the capital city except for takeout and delivery. Other measures include limiting capacity at most retail stores to 25 per cent and suspending sports and recreation programming.

In the rest of the province, restaurants, bars and stores are limited to half capacity. Public gatherings across the province are capped at five people — a restriction that was recently implemented in the Winnipeg region only.

The orders will be in place for at least two weeks.

Premier Brian Pallister said he is considering taking restrictions a step further after hearing about large get-togethers, including Halloween parties being promoted on social media on the weekend. He called for public feedback on a possible curfew before he would make any decision.

“When we were abiding by the fundamentals, we were beating COVID. Some of us lost our way,” he said. “Now COVID is beating us.”

Health officials announced that all members of a household where someone is experiencing symptoms are required to isolate until a test result is received. Dr. Brent Roussin, chief provincial public health officer, said many of the new cases are linked to Thanksgiving gatherings and sports.

“Our numbers are trending in the wrong direction,” Roussin said during Monday’s COVID-19 news briefing. “(They are) trending at a rate we cannot sustain.”

Manitoba went through the summer with few or no new cases. There’s been a significant increase in recent months with deadly outbreaks in care homes and a deluge of community spread.

There have been 1,926 new infections and 25 deaths in the last week alone.

Pallister said people have let their guard down and “perhaps we were cursed by our early success.” Decisive action is needed now, he said, to send the message that people need to be responsible.

Three tickets were handed out last week, despite hundreds of calls complaining about large gatherings, the premier said. Details about further enforcement efforts are to come later in the week.

“The reality is people out there handing out tickets and hitting people in the pocketbook is something we haven’t done as effectively as I’d like and it’s something we must do going forward.”