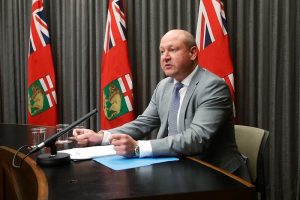 WINNIPEG — New restrictions that are part of Manitoba’s attempt to get COVID-19 back under control take effect today, following a weekend of new daily case counts in the hundreds and 10 new reported deaths.

Bars and restaurants in the Winnipeg region will only be allowed to offer takeout and delivery, and most retail stores will be limited to 25 per cent capacity.

Movie theatres must close and sports and recreation programming will be suspended.

In the rest of the province, restaurants, bars and stores will be limited to half capacity.

Religious services will be capped at 15 per cent in the Winnipeg region and 20 per cent elsewhere.

Public gatherings across the province will be capped at five people — a restriction that was recently implemented in the Winnipeg region only.

“The chief provincial public health officer urges Manitobans to not socialize with people from outside their household, to cut down the number of close contacts and avoid closed-in or crowded spaces,” the province’s daily COVID-19 update read Sunday.

It added people should also focus on fundamentals such as hand-washing, mask-wearing and staying home when sick.

Chief public health officer Dr. Brent Roussin announced the tighter restrictions on Friday, when officials reported 480 new infections, although they said many of the cases were delayed data collection from earlier in the week.

“We have to get things back under control here,” Roussin said Friday.

On Saturday, Manitoba reported it had 349 new positive tests, and had more than 300 new cases on Sunday, the majority of which were in the Winnipeg health region.

Five of the deaths announced over the weekend were tied to an outbreak at the Maples Long Term Care Home in the city.

The restrictions are to be in place for at least two weeks and will be reassessed at that time, Roussin said.