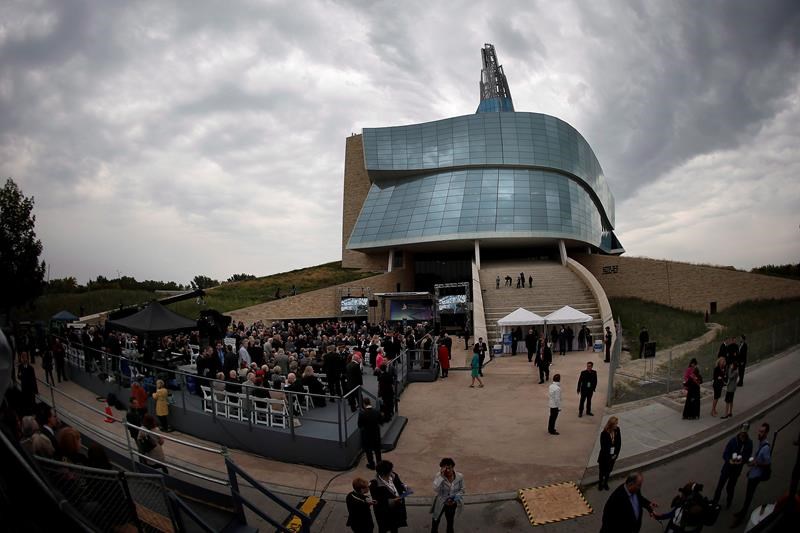 Guests gather at the grand opening of the Canadian Museum For Human Rights in Winnipeg on Friday, Sept. 7, 2014. (THE CANADIAN PRESS/John Woods)

WINNIPEG — The Canadian Museum for Human Rights in Winnipeg has laid out how it will move forward after allegations of racism, homophobia and censorship.

She says it addresses recommendations from an external review that found racism is pervasive and systemic in the museum’s employment practices, policies and in the actions of employees.

The museum was criticized earlier this year by current and former employees online after it posted images of a Justice for Black Lives rally.

The employees said it was hypocritical to bring up the Black Lives rally when museum staff face racism at work.

Some also said that LGBTQ content in the museum was censored at the request of certain school groups.

“Creating lasting change requires a deep commitment to challenging our systems and the way we work,” Khan said in a news release Thursday.

Khan began a five-year term leading the museum in August after the allegations led to the resignation of former CEO John Young. She pledged to create an inclusive and respectful work environment.

The newly released plan includes commitments to evaluate staff retention rates, to review board policies for bias and to bring in different recruitment methods. The museum aims to create opportunities for staff to share and learn about their experiences of racism, homophobia and all forms of discrimination.

Another goal is to develop new content to reflect the country’s history of oppressing Black Canadians. All current exhibits are to be reviewed to identify where stories from Indigenous, Black, LGBTQ and disability communities have not been adequately included.

Staff were provided a draft of the framework in September and gave feedback, the museum said. There were also consultations with community organizers.

Khan said it is not a checklist and will take significant and long-lasting effort. She said the intent is to address systemic racism and discrimination in a meaningful way and not only as “window dressing.”

“We all believe in the potential of this museum to make a difference for human rights.”