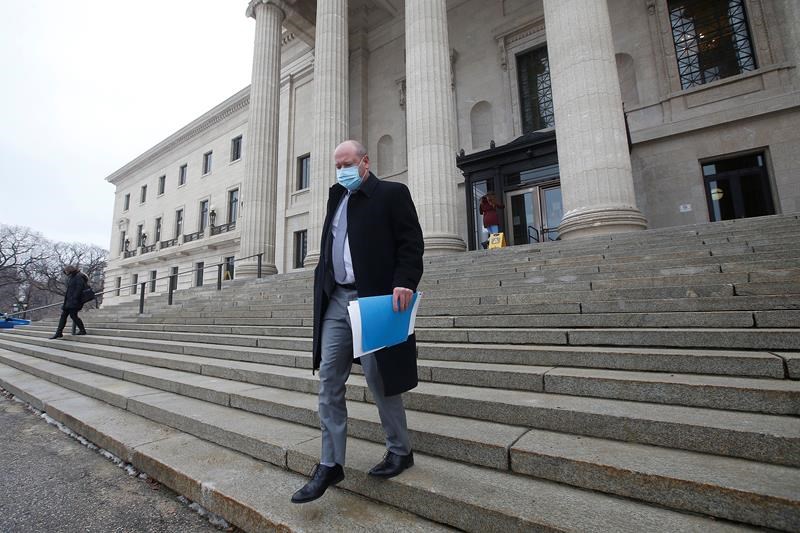 WINNIPEG — The Manitoba government is increasing restrictions in the southern health region — a large area of small cities, towns and farmland — as COVID-19 numbers continue to climb.

On Monday, the region is to be moved to the red, or critical, code on the province’s pandemic response scale, just as the greater Winnipeg area was this week.

The designation means bars and restaurants will have to close except for takeout and delivery, most retail stores will operate at 25 per cent capacity, and religious gatherings will be capped at 15 per cent or 100 people, whichever is lower.

Manitoba’s chief public health officer said most of the community transmission in the region is in Steinbach, a city of 15,000 southeast of Winnipeg. He warned that religious gatherings could be further limited if case numbers keep rising.

“If we see any ongoing transmission, or more transmission that’s linked to these events, then we may well have to further limit that,” Dr. Brent Roussin said Friday.

Manitoba had a single active COVID-19 case at one point in the summer, but numbers have since surged and the province now has the highest per-capita active case rate in the country.

Health officials reported 242 new cases and five additional deaths. The percentage of people who tested positive over the previous five days stood at 9.1 per cent.

The province started with an initial round of restrictions in Winnipeg, then tightened them. Roussin said some businesses, which he wouldn’t name, have tried to work around the rules.

“It’s somewhat frustrating over time, and especially right now, where we get calls in or are informed of businesses trying to work around the (public health) orders, or to try to interpret the orders in a way that’s obviously outside the spirit of the orders,” he said.

“Right now, no one should be looking for ways for Manitobans to gather.”

The provincial government released a plan Friday to increase hospital capacity if COVID-19 cases increase further. Already, intensive care beds, including those occupied by non-COVID-19 patients, are above 90 per cent capacity.

The plan includes repurposing some existing hospital space for intensive care, bringing in retired staff and students to bolster the ranks and, if need be, securing space in large venues such as convention centres and moving some hospital patients there.

“In the event of an extreme surge, we … have plans to establish a low-acuity overflow site — more than one if need be — that will provide space to care for patients who are in hospital but have low-acuity needs,” said Lanette Siragusa, chief nursing officer with Manitoba Shared Health.

The Manitoba Nurses Union said the government has been slow to prepare for a second wave of COVID-19, which experts knew would come.

“It illustrates that government and health officials are scrambling to put plans in place now, when our system is already stretched too thin,” union president Darlene Jackson said in a statement.