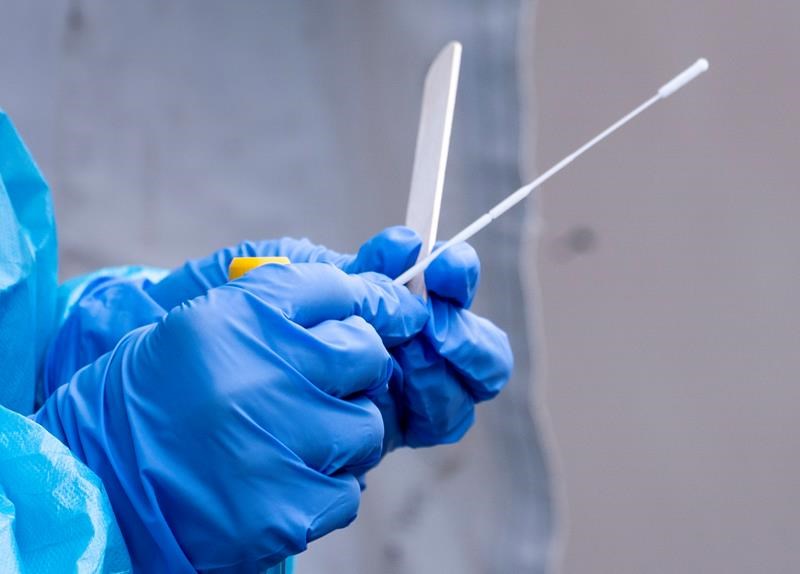 A nurse gets a swab ready at a temporary COVID-19 test clinic in Montreal, on Friday, May 15, 2020. (THE CANADIAN PRESS/Paul Chiasson)

WINNIPEG — Seven residents with COVID-19 died within 48 hours at a Winnipeg long-term care home, and paramedics who responded to calls at the facility Friday night stayed to help staff provide care.

Gina Trinidad with the Winnipeg Regional Health Authority told a news conference Saturday that there were multiple EMS calls for the Maples Personal Care Home on Friday night, and two residents died by the time ambulances arrived, although one of those patients didn’t have COVID-19.

Three were taken to hospital and seven other residents were monitored and given medical care on-site.

Trinidad says only one of the seven residents who have died from COVID-19 in the last 48 hours died Friday night.

Trinidad says nursing staffing at the home was at 100 per cent Friday evening, but the per centage of health-care aids who would normally be on duty was 65 per cent.

Jason Chester with Revera, the company that operates the home, offered heartfelt condolences to the families of the affected residents and says Maples has been exceeding 3.6 hours of care per resident per day.

“We did do everything within the guidelines. We did exceed some of the guidelines,” Chester, who is Revera’s vice-president of long-term care operations in western Canada, told the news conference.

The COVID-19 outbreak at Maples has so far claimed 22 lives.

“Winnipeg paramedics arrived to support the staff, transporting three residents to hospital and providing IV therapy for others,” he said.

Trinidad said she arrived at the home shortly after midnight and observed EMS helping and monitoring residents. She said that since it was so late, many residents were sleeping. Staff were present on every floor, and she said the level of care was satisfactory.

“The nurses did their assessment. They felt that they could not manage the medical care, the clinical care for these residents and certainly called EMS,” she said.

Opposition NDP Leader Wab Kinew said in a news release that the news that paramedics were needed to provide care at the home is “shocking and deeply concerning.”

“The good work of paramedics should not be expected to fill in for the failures of the provincial government,” Kinew said, adding the province needs to step in and take control over Maples and another Winnipeg home with an outbreak.

Trinidad said the Maples facility will be the first to benefit from extra support staff as part of a request made earlier in the week with the Canadian Red Cross. She said approximately 20 staff will be deployed there, likely by Friday.

Manitoba reported seven new COVID-19 deaths on Saturday for a total of 103, and the total number of cases in the province climbed by 271.