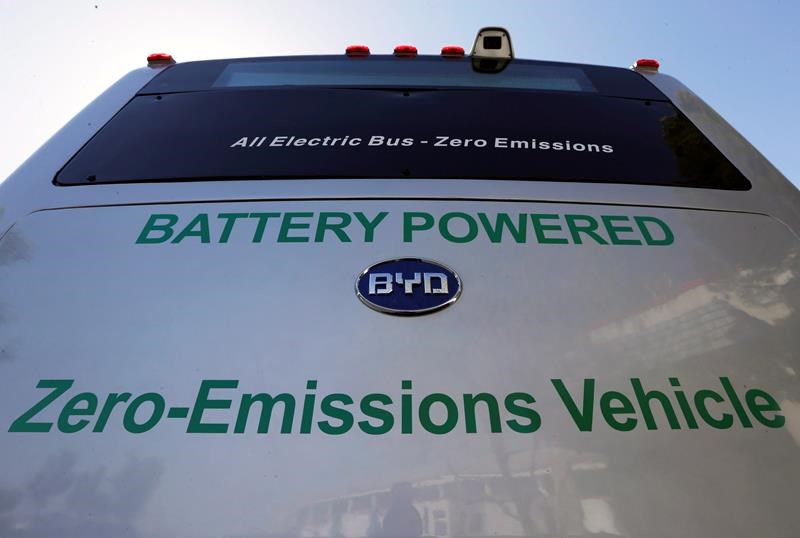 In this May 1, 2013, file photo, an All Electric Bus, a Zero-Emissions Vehicle, produced by China’s BYD Co., is parked at the announcement of the opening of an electric bus manufacturing plant in Lancaster, Calif. (THE CANADIAN PRESS/AP/Reed Saxon)

Josipa Petrunic, the CEO of the Canadian Urban Transit Research and Innovation Consortium, wrote in a letter to Trudeau Wednesday that’s not nearly enough. She is calling on him to make good on his 2019 election promise to invest at least $3 billion more into public transit each year.

“The problem is over the last two years, federally and also in organizations within transit, people have radically underestimated the cost of doing this upfront,” she said. “It is not cheap.”

The consortium, known as CUTRIC, is a non-profit organization seeking to advance zero-carbon technology in transportation. It counts among its members many of Canada’s largest transit agencies including in Toronto, Vancouver, Calgary, and Winnipeg, dozens of private companies involved in electrifying transportation, as well as several electric utilities and universities.

Petrunic says an electric-battery bus costs between $1.1 million and $1.2 million, about twice as much as a $600,000 diesel version. Buses powered by hydrogen fuel cells can cost upwards of $1.6 million each.

On top of that they need charging infrastructure, including one high-capacity charging station for every eight buses on the road; the road work needed to install them; and upgrades at transit garages. Petrunic says the estimate is that it will cost as much as $30 billion to electrify all 15,000 or so of Canada’s public buses.

“It will pay itself off over 20 years, we will save money as taxpayers over diesel,” she said. “There’s no doubt about that. But it won’t pay itself off in Year 1, and somebody has to pay for all that in Year 1.”

“We are always ready to work with our partners to build up Canada,” she said. “That’s what we’ve been doing and will continue to do.”

Many of Canada’s transit agencies have been hit hard by the pandemic as commuters worked from home or used alternatives to transit. Statistics Canada says daily transit use fell nearly 70 per cent between March and August compared to 2019, with a corresponding decline in revenues.

Petrunic says helping the agencies finance electric buses will be a boost as they try to recover from the pandemic. Canada also has four companies making electric buses, including two big ones: Novabus in Quebec and New Flyer in Winnipeg. An electrification program would combined retain and create nearly 800,000 jobs, CUTRIC claims.

Public transit buses are not a significant contributor to Canada’s greenhouse-gas emissions — an estimated 1 million tonnes a year, or about what is produced by 216,000 passenger vehicles. Petrunic acknowledges that compared to electrifying cars or heavy trucks, electrifying buses is very expensive per tonne of greenhouse gas eliminated.

But she said the high-speed charging networks can encourage the adoption of electric freight and delivery vehicles, because those vehicles would need similar charging stations and could rent the transit chargers outside of peak travel periods. Heavy diesel vehicles produced about 50 million tonnes of greenhouse gases in 2018, or almost seven per cent of all Canadian emissions.

Petrunic says out of Canada’s 100 transit agencies, about one-fifth are ready to start buying electric buses. Several already have pilot programs. She said the Infrastructure Bank can also be more flexible with helping finance electric buses, compared to the private sector, and take into account that it might be a year or longer before many transit systems see ridership return to more normal levels.