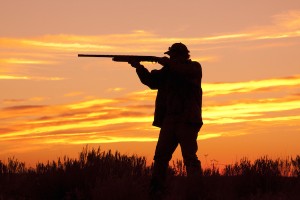 (Hunter at sunset image via Shutterstock)

Manitoba conservation officials are continuing their crackdown on illegal night hunting in the province.

Conservation officers conducted an investigation in the Minto area and determined the moose was shot off a municipal road on private land. One man from Minto was charged with discharging a firearm off of a municipal road, as well as possessing illegally taken wildlife and was issued a warning for hunting on private land without permission.

The second man, from Millet, Alberta, was also charged for possessing illegally taken wildlife and issued a warning for hunting on private land without permission. Both men were issued a restitution notice for $2,500 for the moose.

Officers seized one bull moose and a rifle. The moose was dropped off at Killarney Meats who will process the moose meat free-of-charge so it can be donated to local food banks.

As the investigation is ongoing, further charges may be pending.