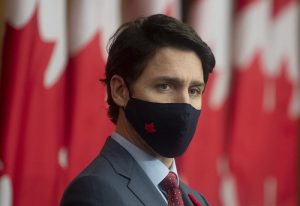 OTTAWA — Prime Minister Justin Trudeau is warning premiers that provinces need to take stronger action to stem the rapid spread of COVID-19 or the federal government could face “impossible decisions” about where to allocate its limited resources.

As several jurisdictions notched grim new records this week, Trudeau said Friday that it will take a collective effort from all levels of government to reverse the alarming trajectory of the outbreak.

He said individuals will also have to do their part by limiting their socializing with people outside their household. Trudeau said decisions now will determine what happens come the holiday season.

“We need to hang in there together for a little while longer,” Trudeau said. “What we do in the coming days and weeks will determine what we get to do at Christmas.”

Canada is reporting more than 45,000 active COVID-19 cases, the highest total since the pandemic began. There was also a new national daily high of 5,516 new cases on Thursday.

Dr. Theresa Tam, chief public health officer, said Canada is projected to hit 10,000 COVID-19 cases per day by early next month if the wildfire spread of the virus continues.

Tam said public health labs tested an average of close to 55,000 people daily over the past week and six per cent test positive.

The number of severe cases also continues to rise, with an average daily increase of 1,400 hospitalizations, including 280 in critical care, she said.

Trudeau said premiers told him about the challenges they’re facing during a conference call Thursday evening.

The prime minister said he assured the premiers his government is prepared to offer more support, but reminded them that “our resources are not infinite.”

He said without stricter provincial measures to rein in the surge in COVID-19 cases, there may not be enough federal help to go around.

“Controlling the virus now reduces the chances of impossible decisions and choices we might have to make down the road,” Trudeau said Friday.

He acknowledged that provinces continue to make tough but necessary decisions to control outbreaks in their communities, such as localized shutdowns and restrictions on businesses and activities.

But he said there’s a “threshold” at which the soaring tally of infections and hospitalizations will outpace the federal government’s ability to offer backup.

“If we have limited resources, we may at some point have to choose between helping one region or another,” Trudeau said in French.

In a news release Friday, the doctors’ group said Canada may be at a “tipping point” as the rising tide of cases pushes parts of the health-care system to near or full capacity.

“The measures being taken to mitigate the virus are not sufficient,” the association said. “The strength of the economy should not come at the expense of Canadians’ lives.”

Saskatchewan heeded the calls for tougher restrictions with a 28-day mandate expanding its mask rules and imposing a curfew on alcohol sales.

The province reported 81 new COVID-19 cases, a slight dip from the prior six days of more than 100 new daily infections.

Each of the Prairie provinces reported new highs in COVID-19 hospitalizations this week.

Ontario lowered the thresholds for imposing stricter COVID-19 measures under its colour-coded framework Friday in light of what Premier Doug Ford called “alarming” new projections and the looming threat of another provincewide lockdown.

Trudeau also announced $1.5 billion in federal funding on Friday to help provinces retrain workers left jobless by the pandemic, on top of the $3.5 billion that had previously been committed.

The premiers and prime minister have agreed to meet early next month to discuss potential increases in federal funding through the Canada Health Transfer.