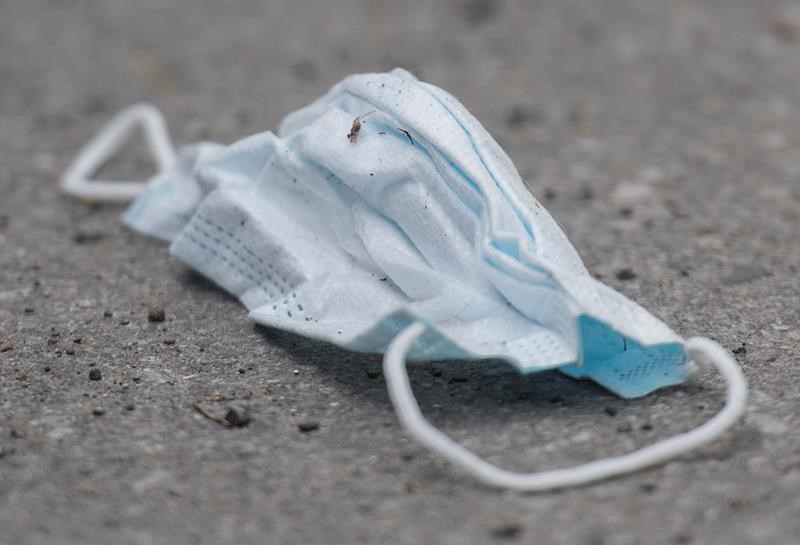 A discarded face mask is shown on a street next to a mobile COVID-19 testing clinic in Montreal, Sunday, May 17, 2020, as the COVID-19 pandemic continues in Canada and around the world. (THE CANADIAN PRESS/Graham Hughes)

STEINBACH, Man. — Manitoba’s justice minister condemned the actions of demonstrators opposing mandatory masks and other lockdown measures in a community southwest of Winnipeg over the weekend, calling actions at the event “incredibly unfortunate, dangerous and wrong.”

Cliff Cullen thanked the officers who enforced provincial health orders at Saturday’s event in Steinbach, Man., and issued a stern reminder that those who break COVID-19 restrictions will be ticketed.

“The language and vitriol experienced by our enforcement personnel at (Saturday’s) event is absolutely unacceptable. These individuals are working to keep all Manitobans healthy and safe so we can slow the spread of this virus and save lives,” Cullen said in the statement.

“Manitobans have been warned and, if they choose to participate in events that openly disregard public health orders, they can expect that enforcement action will be taken.”

The rally in Steinbach drew a large crowd, though it came just a day after the president of the Manitoba Nurses Union said nurses reported having to triage patients in their cars at the local hospital because of a lack of space in the Emergency Department. .

Lewis Weiss, a local reeve who spoke at the rally but said he was not an organizer, claimed he followed the rules by keeping well away from everyone else but still received a $1,296 ticket from a provincial official for disobeying a public health order.

RCMP Cpl. Julie Courchaine said police partnered at the rally with provincial health officials, who she said were there to monitor and issue fines.”

“The RCMP respects individuals charter right to peacefully assemble while balancing that with the safety of the public. RCMP officers were present during the event to ensure that the peace was kept,” Courchaine said in an email Saturday.

Manitoba reported 731 new COVID-19 cases on Saturday and Sunday as well as 25 additional deaths, 18 of which were linked with an outbreak at a Winnipeg care home.

Cullen said the message from Chief Public Health Officer Dr. Brent Roussin and the government has been clear – every Manitoban needs to follow the direction of public health officials to get COVID numbers under control.

“As Dr. Roussin says, the best way to do that is to stay home. That is the message that we all need to follow – stay home,” Cullen said.