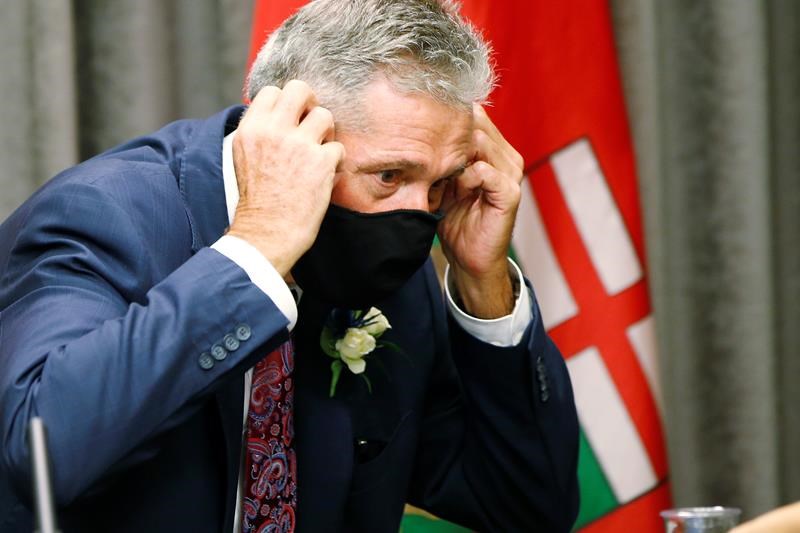 Manitoba premier Brian Pallister puts on a mask after speaking to media prior to the reading of the Speech from the Throne at the Manitoba Legislature in Winnipeg, Wednesday, October 7, 2020. (THE CANADIAN PRESS/John Woods)

WINNIPEG — Manitoba Premier Brian Pallister says those who attended a rally to protest COVID-19 restrictions will be getting fines in their mailboxes.

Pallister says people who engaged in what he called “stupidity” will face the consequences via the mail.

He says more details are to come, but hints tickets could be based on the licence plates of vehicles seen at the rally that was held Saturday in Steinbach, Man., southeast of Winnipeg.

Well over 100 people attended the event to protest mandatory masks and other restrictions aimed at slowing the spread of COVID-19 in the province.

The rally was held as Steinbach’s hospital was near capacity and Manitoba’s COVID-19 numbers continued to rise.

← Previous: Some Manitobans Are Not Getting the Message About COVID-19: Top Doctor Next: Manitoba Reserve on Lockdown After All Residents at Care Home Infected with COVID-19 →
Tags: Coronavirus | Health | Manitoba | Steinbach | Winnipeg