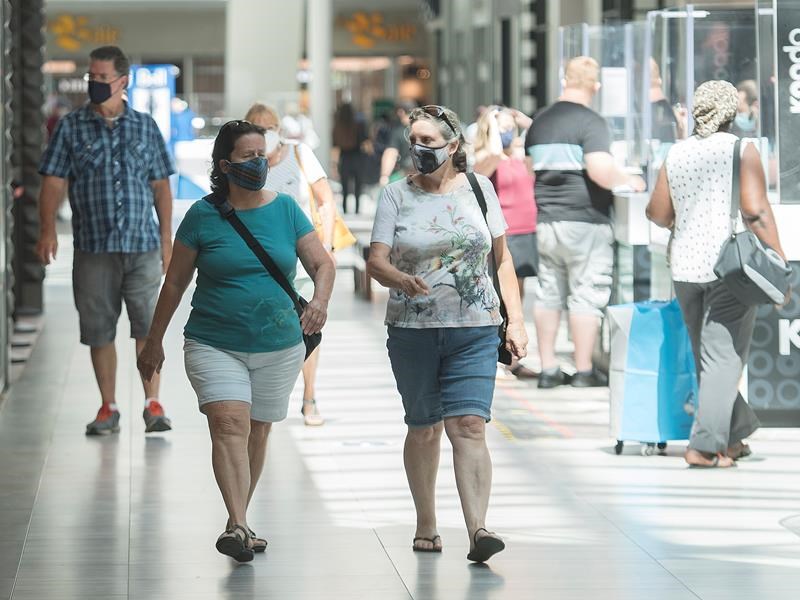 People wear face masks as they walk through a shopping mall in Montreal, Saturday, July 18, 2020, as the COVID-19 pandemic continues in Canada and around the world. (THE CANADIAN PRESS/Graham Hughes)

Dr. Brent Roussin said there is no reason for stores to advertise Black Friday sales for the traditional annual shopping splurge later this month.

“We’ve seen a number of advertisements from stores here in Manitoba about big in-person sales on Black Friday, talking about lining up to get in,” Roussin said.

“This is irresponsible. We can’t accept this. We’re in code red … we have people dying every day.”

The Manitoba government has already forced many stores to shut down, but those that carry critical items — a long list that includes groceries, prescription drugs, office supplies, computers and hardware — are allowed to remain open at reduced capacity.

“We may just reconsider what those categories of essential businesses are and the rules that govern them. It’s very critical that we act now.”

The Retail Council of Canada said while there may be some stores relying on traditional Black Friday shopping, many have adapted to the pandemic by promoting online buying or spreading out sales over several days.

“Progressive retailers have amended how they’re marketing this year … to minimize the congestion in stores and to support the efforts of physical distancing for employees and customers,” said John Graham, the council’s director of government relations for the Prairies.

Some Black Friday advertisements may have been booked before Manitoba imposed its latest round of restrictions, Graham added.

Cases started spiking in late summer, which prompted a series of increasing restrictions. In recent days, doctors, nurses and Roussin himself have warned that hospital capacity is running close to full. Last Friday, nurses at one hospital in Steinbach said they resorted to triaging patients in their cars because the emergency department was full.

Roussin said the government is considering more measures to try to flatten the curve, such as reducing the five-person limit on gatherings. He has urged people not to socialize with anyone who is not a member of their household, but the formal public health order allows for groups of five.

“Is there a way that we can clarify that and make that more strict as well? These are all things we’re reviewing.”

The province may also extend the school break over Christmas by two weeks so that students, who may come into contact with many people over the holidays, won’t have to return to class until mid-January, Roussin added.

Even a curfew, which Premier Brian Pallister had floated earlier this month before setting the idea aside, appears to still be an option.

“It has to remain on the table because we have to see the COVID … numbers come down,” Pallister said Tuesday.

He also promised stepped-up enforcement of restrictions. The province is hiring a private security firm, G4S Canada, to help hand out fines for infractions. The security company will join police, provincial conservation officers and others already enforcing the rules, the premier said.

He also said he has been talking with the federal government about the possibility of having the military help with an outbreak on the Opaskwayak Cree Nation, where all 28 residents at the Rod McGillivary Memorial Care Home have tested positive for COVID-19.