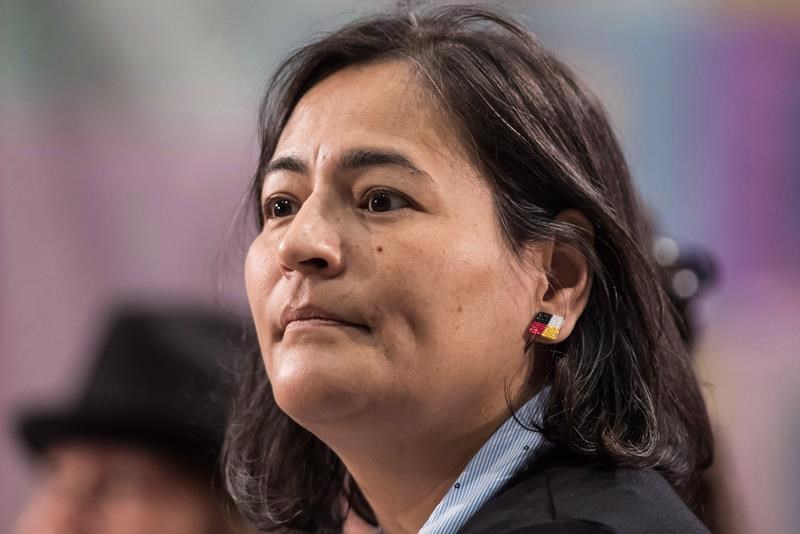 Commissioner Michèle Audette listens at the final day of hearings at the National Inquiry into Missing and Murdered Indigenous Women and Girls, in Richmond, B.C., on April 8, 2018. (THE CANADIAN PRESS/Darryl Dyck)

OTTAWA — A commissioner who served on the inquiry into missing and murdered Indigenous women and girls says top-down attitudes and the centralized structure of the RCMP are leading to racist practices against Indigenous people in Canada.

Speaking in French to the House of Commons public safety committee, Michèle Audette said there is goodwill from some within the RCMP, but the organization exhibits systemic racism that she has been denouncing for a long time.

She said there should be Indigenous oversight of the RCMP through a civilian body that can listen to complaints and be trusted by the people who make them.

“If we were to add a place where people could file a complaint, and where people would feel like they taken seriously, that would be helpful,” she said.

“That’s already done in Quebec. There is an independent office. It’s not perfect, but it’s a start.”

Audette said the mistrust between Indigenous communities and the RCMP exists because the RCMP for decades removed Indigenous children from their families and took them to residential schools.

For three years, Audette listened to testimony from Indigenous families and experts. She recalls stories about crime victims not being supported or families not taken seriously when a loved one disappeared. Some spoke about not knowing where to turn if they alleged police were the perpetrators of harm.

The inquiry’s final report was delivered to the federal government in June 2019. It included 231 “calls for justice” – many of which included police reform and increased oversight.

School curriculums should be modernized to teach Indigenous culture and history to dissipate ignorance, Audette said, adding that young people want to learn the history of Indigenous Peoples.

“I don’t understand why (until) today we only teach an inadequate history to our young people,” she said. “Young people from various backgrounds are telling us, we want to understand the Aboriginal history.”

She said teaching Indigenous history can restore pride to Indigenous Peoples. “We’ve been deleted from history.”

Audette said police officers who are well-trained and sensitive can protect Indigenous people and save their lives.

“We want real police officers. We want men and women who are sensitive so that we’re protected,” she said. “We want to make sure that we feel safe within our communities.”