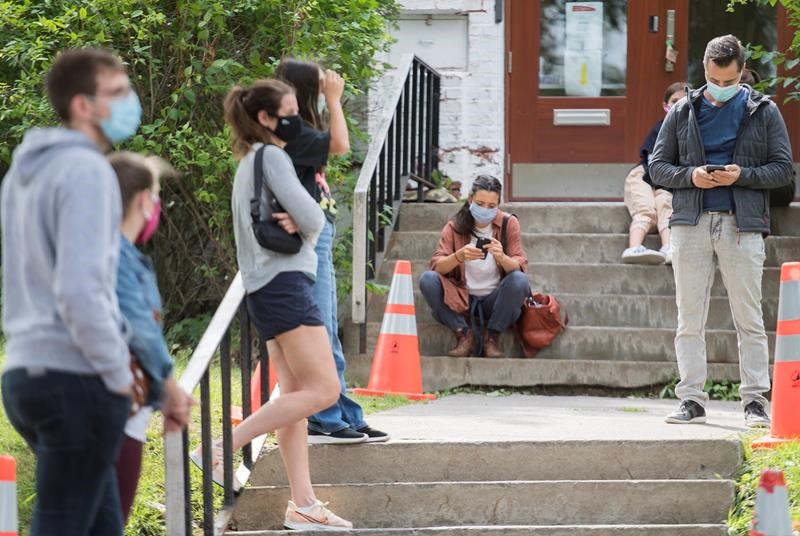 People wear face masks as they wait to enter a COVID-19 testing clinic in Montreal, Monday, September 7, 2020, as the COVID-19 pandemic continues in Canada and around the world. (THE CANADIAN PRESS/Graham Hughes)

OTTAWA — Alarming new projections for the spread of COVID-19 in Canada are expected to forecast a dramatic rise in cases over the next few weeks if Canadians don’t strictly limit their contact with people outside their households.

Chief public health officer Dr. Theresa Tam has already warned that Canada is on track to hit more than 10,000 cases per day by early December if current trends continue.

That’s more than double the current daily case count, which is already straining the health care system in some regions.

New federal modelling of the course of the pandemic is to be presented publicly Friday morning.

Sources briefed on the work say the modelling will project a much worse scenario by the end of December — 20,000 cases per day at the current rate of contacts and as much as 60,000 a day if Canadians increase their number of contacts as the holiday season approaches.

The sources spoke on condition of anonymity because they were not authorized to speak publicly about the modelling before its official release.

The Prime Minister’s Office said the purpose of the briefing was to keep opposition leaders in the loop and impress upon them the need to put aside partisanship and join in a common effort to urge Canadians to strictly limit their contacts with people outside their households.

That did not stop Conservative Leader Erin O’Toole from blaming the Trudeau government for the worsening state of affairs.

“What struck me was that 11 months after news about the spread of COVID-19 emerged, after thousands of lives and millions of jobs have been lost, and hundreds of billions of dollars has been added to the national debt, we as a country are worse off than we were at the start of the pandemic,” O’Toole said in a statement after the briefing.

“We are in this position because the government failed to give Canadians the ability to rapidly and frequently test for COVID-19; has failed to tell Canadians how they plan to deliver a vaccine; and failed to be transparent with Canadians about what COVID-19-related information they are using to make decisions that affect lives and jobs.”

O’Toole called for a “real plan to test, trace, and isolate those who are infected” and added that “shutting down the entire country again is simply not a solution.”

NDP Leader Jagmeet Singh said in a statement that opposition leaders heard during the briefing “the same news Canadians are seeing on their TVs,” referring to leaked news of the updated projections.

“The number of COVID-19 cases is going up across the country and people are worried about what this means for their families and communities,” Singh said.

“We must continue to face this pandemic by doing each our part to flatten the curve. Wear a mask, wash your hands and don’t travel outside of your home unless it is essential.”

Green Leader Annamie Paul told CBC the briefing was “sobering” and that it underscored her call for a co-ordinated national strategy to curb the spread of COVID-19.

Bloc Québécois Leader Yves-François Blanchet did not attend the briefing. He sent his House leader, Alain Therrien, in his stead.

Tam has said Canadians need to reduce their current rate of contact with others by at least 25 per cent in order to flatten the curve.

And last week, she and Njoo gave a graphic description of the consequences if the trajectory toward more than 10,000 cases per day is not halted.

At the current level of just under 5,000 cases per day, Tam said routine medical procedures are being cancelled, intensive care beds are almost full and health-care workers are exhausted.

“So you can only imagine that if we got to that level (of 10,000), that the pressure on the health-care system will be huge,” she told a news conference in Ottawa on Nov. 13.

“You would definitely not be doing routine surgeries, and that the already exhausted health-care workers will be, you know, extremely stretched,” she said.

Njoo pointed to what happened in northern Italy and New York City last spring, when their health systems were overwhelmed.

“Doctors were having to make a life and death decision in terms of who would be on a ventilator, who wouldn’t. And who wants to be in that position?”