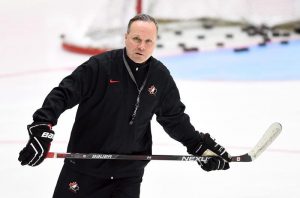 WINNIPEG — The Winnipeg Jets have hired Dave Lowry as an assistant coach.

The 55-year-old from Sudbury, Ont., joins the Jets after spending the 2019-20 season as head coach of the Western Hockey League’s Brandon Wheat Kings.

He led the club to a 35-22-6 record and the Wheat Kings had clinched a playoff berth before the season ended March 18 due to the COVID-19 pandemic.

Lowry has also been a head coach of Calgary and Victoria in the WHL.

Lowry’s son Adam is a forward with the Jets, whose 2019-20 season came to an end after a 3-1 loss to Calgary in a playoff qualifying series in Edmonton.

Dave Lowry won a gold medal as an assistant coach for Canada at the 2015 world junior championship before serving as head coach for in 2016, when the Canadians lost to Finland in the quarterfinals.

“Dave brings a tremendous amount of experience to our coaching staff in a variety of different areas,” Jets head coach Paul Maurice said in a release. “His success working with young players in their development can’t be denied as he had an excellent season last year in Brandon and has coached the country’s top junior players. He has worked in all aspects of special teams during his time as an NHL assistant coach.

“We’re very excited to bring Dave on board and join our staff.”