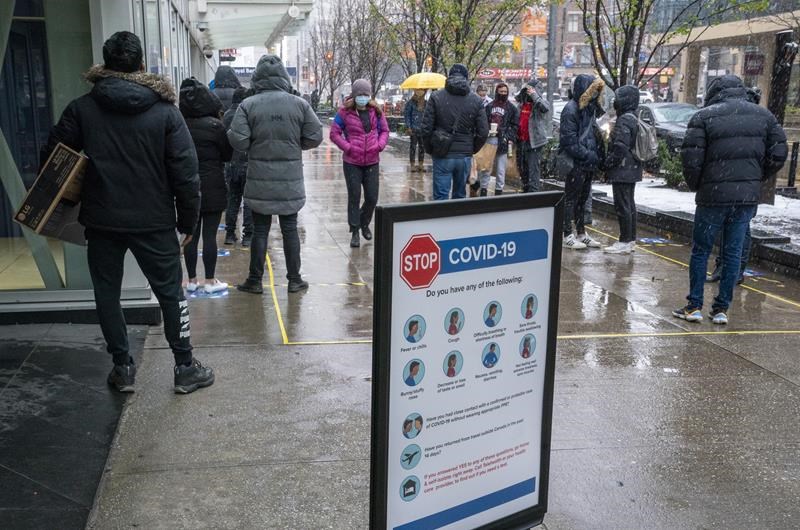 Crowds of people line up outside an electronics store in Toronto on Sunday, November 22, 2020. (THE CANADIAN PRESS/Frank Gunn)

WINNIPEG — More than $126,000 in tickets have been handed out to Manitobans for violating COVID-19 public health orders within the last week.

Premier Brian Pallister provided an enforcement update on Tuesday, saying 79 warnings and 95 tickets were issued last week between November 16 to 22.

Nine businesses were handed tickets worth $5,000 each, plus 55 tickets were issued to individuals at $1,296 each. Three band bylaw tickets were also issued by the Manitoba First Nations Police Service.

The increase in fines — up from $49,992 the week prior — comes as the province increased enforcement as tougher public health orders came into effect.

An anti-mask rally in Steinbach on November 16 has resulted in 16 tickets being issued after the fact, with more expected to arrive in the mailboxes of those who attended. One person who attended a subsequent event at the Legislative Building in Winnipeg on November 21 was identified and served with a ticket for their participation in the earlier event.

The province is also investigating a large church service gathering in Steinbach that occurred last weekend. One people received a $1,296 ticket and more tickets for other participants are expected.

Since enforcement efforts began in April, a total of 388 warnings and 307 tickets have been issued, resulting in more than $390,000 in fines to businesses and individuals.