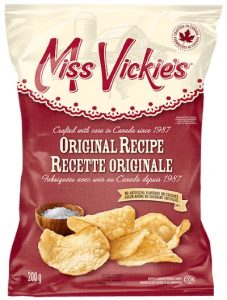 Miss Vickie’s has recalled some potato chips sold in several regions of the country. (CFIA)

MISSISSAUGA, Ont. — Miss Vickie’s Canada says some of its potato chips that were part of a recall in Eastern Canada earlier this month due to possible glass contamination were inadvertently shipped west.

The company says the chips were only shipped to retail customers in Alberta, Brandon, Man., and Moose Jaw, Sask, and that it’s working with the Canadian Food Inspection Agency to co-ordinate a voluntary recall.

It says 630 bags are involved, and they have very specific “guaranteed fresh” dates and “manufacturing codes.”

Consumers who have purchased the chips should not eat them and are urged to throw them out or return them to the place of purchase for a full refund.

At the beginning of November, Miss Vickie’s recalled some chips sold online and in Ontario, Quebec and Atlantic Canada due to what it said was “isolated reports of the presence of a small piece of glass found at the bottom of the bag.”

The CFIA says on its website there have been reported injuries associated with the products.