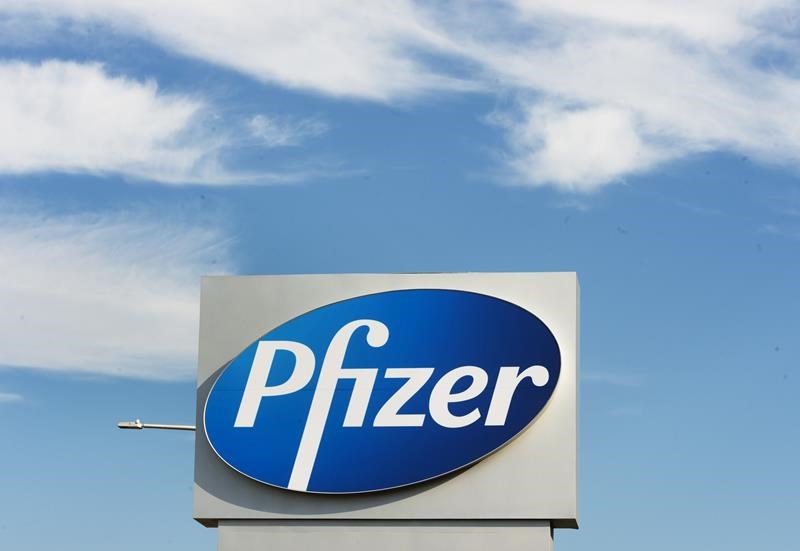 The corporate headquarters of Pfizer Canada are seen in Montreal, Monday, Nov. 9, 2020. (THE CANADIAN PRESS/Ryan Remiorz )

OTTAWA — The first COVID-19 vaccine could be approved for use in Canada within two weeks, Health Canada’s chief medical adviser said Thursday.

The department’s medicine review team is currently reviewing three COVID-19 vaccines — one from Pfizer and BioNtech, a second from Moderna and a third from AstraZeneca.

Dr. Supriya Sharma said at a briefing to reporters in Ottawa that the Pfizer review is the most advanced of the three and that Health Canada is working alongside similar review teams in the United States and Europe.

“We’re basically looking at the same data packages. We have very similar authorization pathways that are available for public health emergencies,” she said.

“The way that the reviews are progressing is that we’re expecting to make a final decision on the vaccines around the same time as the (U.S. Food and Drug Administration) and the European Medicines Agency.”

The FDA is to meet Dec. 10 to decide on approving the Pfizer vaccine. Pfizer is set to ship more than six million doses as soon as that happens.

Sharma was less definitive about when Canadians will start getting vaccinated. She said it is possible the first doses could arrive before the end of December but seemed to think it more realistic for them to start shipping here in January.

Canada has a purchase deal to buy at least 20 million doses from Pfizer and the option to buy another 56 million. The first four million are supposed to arrive between January and March.

A Pfizer spokeswoman told The Canadian Press Thursday there is no exact date yet for shipments to Canada, adding the timing will depend on when it gets approved.

“We are working with urgency in collaboration with stakeholders, including Health Canada and public health decision makers, to bring our vaccine candidate to Canada in a timely manner,” Christina Antoniou said.

Pfizer reported preliminary results from its clinical trials earlier this month, claiming their genetics-based vaccine is 94.5 per cent effective.

Sharma said Health Canada typically assigns seven to 12 people to review a new vaccine for approval, and that those people will go through hundreds of thousands of pages of data. It’s normally a process that takes more than 2,000 hours.

Sharma said they are dedicating even more people to the process for COVID-19, but said safety is a top priority when it comes to deciding if the vaccine can be used in Canada.

“We will only authorize a vaccine if its benefits outweigh its risks,” said Sharma.

Pfizer is just one of seven vaccines Canada has a purchase agreement to get. None of the vaccines have completed clinical trials yet and Health Canada would still need to approve all of them once they do.

Opposition MPs are growing weary of the lack of specific information the federal Liberals are providing on the vaccine plan. They peppered Health Minister Patty Hajdu with questions about it at a committee hearing in the House of Commons Thursday night, including about Canada’s own vaccine production capacity, details of the negotiations to get the Can-Sino vaccine from China which fell apart in the summer, and when Health Canada first learned the Pfizer vaccine needed specialty freezers to keep it at temperatures below -70C.

Hajdu dodged every question with talking points that referenced her pleasure at how many doses of vaccine Canadians will get and how there was a “whole of government approach.”

Conservative leader Erin O’Toole said sarcastically that he was certain Canadians would be thrilled to find they’ll get the most doses two years from now.

NDP health critic Don Davies was equally exasperated when he got no answer to when provinces are being asked to have their vaccine administration plans ready, or why Australia has a fully laid out vaccine rollout plan and Canada does not.

“Perhaps if the minister isn’t going to answer the questions she can do it succinctly,” he suggested.