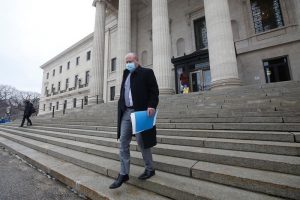 A man in his 30s and a woman in her 40s were among the 11 deaths announced Monday. The death of the youngest person to date — a boy under 10 — was announced Saturday.

“I think we all know we can’t continue along these lines. We have to bring these numbers down. We can’t keep losing this many Manitobans.”

Roussin did not reveal details about the boy who died or his age. Roussin did say the child had underlying health conditions and the case was not acquired in a school.

About 80 per cent of deaths recorded up to Nov. 21 have involved people 65 and over, provincial data charts indicate. Roussin has previously said that while severe outcomes occur predominantly among older people, the novel coronavirus can affect people of any age.

The province reported 342 new COVID-19 cases Monday. It said 44 people with COVID-19 were in intensive care and there were only five beds available. Health officials were looking at opening up a new 14-bed intensive care unit in a Winnipeg hospital.

“Our health system is at risk of being overwhelmed if we can’t reduce these daily case counts,” said Lanette Siragusa, chief nursing officer with Manitoba Shared Health.

In an effort to turn the tide, the government forced many non-essential retail outlets to close and banned public gatherings of more than five people on Nov. 12.

That has prevented the daily number of new COVID-19 cases count from rising higher, Roussin said, citing projections of up to 1,000 cases a day by early December. But the number has remained steady rather than dropping. The percentage of people testing positive has also remained very high at 13 per cent.

“We need to decrease the number of contacts we have, and that’s just a given,” Roussin said.

The ban on gatherings has faced challenges from a couple of churches. One in a rural area outside of Steinbach was fined for hosting a service earlier in the month. RCMP were stationed at the church’s parking lot entrance on Sunday to turn away people arriving by car.

A church in Winnipeg hosted four drive-in services on the weekend and asked people to remain in their cars while a pastor spoke from a stage.

Drive-in services were allowed during the first COVID-19 wave in the spring, but have been banned during the recent spike in an attempt to slow the spread of the virus.

“The more people you have coming together at the same time, the more likely you’re going to have some sort of gathering, some sort of transmission go on there,” Roussin said.