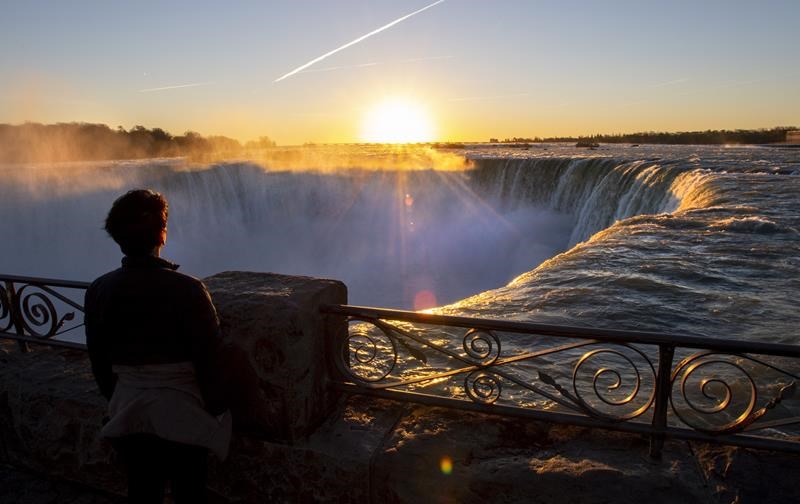 A man watches the sunrise over Niagara Falls in Niagara Falls, Ont. on Wednesday, Nov. 4, 2020. (THE CANADIAN PRESS/Frank Gunn)

Ottawa is rolling out a wave of new funding for pandemic-battered industries including tourism, the arts and regional aviation, with smaller companies top of mind — and large airlines notably absent.

The Liberal government’s fiscal update sketches out a program that will provide low-interest loans of up to $1 million for badly hurt entrepreneurs.

The aid, dubbed the Highly Affected Sectors Credit Availability Program (HASCAP), comes on top of a newly expanded emergency loan program already in place for small businesses, and technically is not limited to certain industries.

Meanwhile the devastated tourism sector will have access to one-quarter of the more than $2 billion that Ottawa is doling out to regional development agencies through June 2021, including a $500-million top-up announced Monday.

The move aims to bolster an industry made up largely of small and medium-sized businesses and that accounts for roughly 750,000 jobs and two per cent of GDP, according to the government.

Another $181.5 million will flow to show business and performers via the Department of Canadian Heritage and the Canada Council for the Arts, the fall economic statement says.

Rent relief and nearly $700 million in capital investments are en route to airports over six years. About $206 million in further support is bound for regional aviation, including smaller airlines, via a new “regional air transportation initiative” overseen by development agencies.

But an aid package targeting big players such as Air Canada and WestJet Airlines remains in the works as talks with Ottawa drag on, with the lack of specifics in the fiscal update frustrating industry leaders.

“We had hoped to get a better sense of where the government was going. Instead they repeated the line that they’ve repeated several times over the past several months — that they’re ‘establishing a process with major airlines regarding financial assistance,’ ” said Mike McNaney, head of the National Airlines Council of Canada.

Countries around the world have given carriers US$173 billion in support, he said. Many have also required airlines to offer refunds for cancelled flights, something Ottawa says will be a condition of any bailout.

“We are very much a global outlier and are ostensibly stuck at Stage Zero on the government planning process,” McNaney — whose industry group represents Air Canada, WestJet, Transat and Jazz Aviation — said in a phone interview.

The regional aviation support comes with question marks, as well.

“A regional initiative, what’s that?” asked John McKenna, CEO of the Air Transport Association of Canada, which represents some 30 regional airlines.

“We have no idea. We have not been consulted,” he said in a phone interview. “Never mind new initiatives, try to support the existing services so they survive.”

In a speech to the House of Commons, Finance Minister Chrystia Freeland stressed the benefits of the broader government-backed loan program for smaller companies.

“We know that businesses in tourism, hospitality, travel, arts and culture have been particularly hard-hit,” Freeland said.

“So we’re creating a new stream of support for those businesses that need it most — a credit availability program with 100 per cent government-backed loan support and favourable terms for businesses that have lost revenue as people stay home to fight the spread of the virus.”

The HASCAP credit program will offer interest rates below the market average, according to the fiscal update, with more details coming “soon.”

It also said the government is “exploring options to enhance” a federal loan program for big companies, little-loved by industry since its inception in the spring.

The Large Employer Emergency Financing Facility (LEEFF) offers loans of $60 million or more to large businesses facing cash problems, but comes with an interest rate that jumps to eight per cent from five per cent after the first year — far above typical private-sector lending rates.

Only two firms have been approved for LEEFF loans since the Liberals announced the program on May 11, according to the Canada Enterprise Emergency Funding Corporation: a casino company and a producer of metallurgical coal.

“They have not rolled out any sector-specific supports, meaningfully, that are tied to jobs,” he said.

Bloc Québécois Yves-François Blanchet slammed the lack of “precision” in the fiscal snapshot.

“They basically say that there is no limit to what they will spend, without saying or without admitting how badly you spend it,” he said.

The $686 million in airport aid includes $500 million over six years, starting this year, to back infrastructure spending at large airports that would include massive transit projects, such as the new light-rail station at the Montreal airport.

The government is also proposing to extend $229 million in additional rent relief to the 21 airport authorities that pay rent to Ottawa, with “comparable treatment” for Ports Toronto, which operates Billy Bishop airport in downtown Toronto.

The supports unveiled Monday come on top of Ottawa’s pan-sectoral announcement to raise the wage subsidy to 75 per cent of company payroll costs — it was reduced to a maximum of 65 per cent in October — as well as an extension of the rent subsidy to mid-March from the end of 2020.

David Chartrand, Quebec coordinator for the International Association of Machinists and Aerospace Workers, applauded the wage subsidy, but lamented the radio silence on large airlines.

“After almost 10 months of crisis, still nothing,” he said in a release in French.