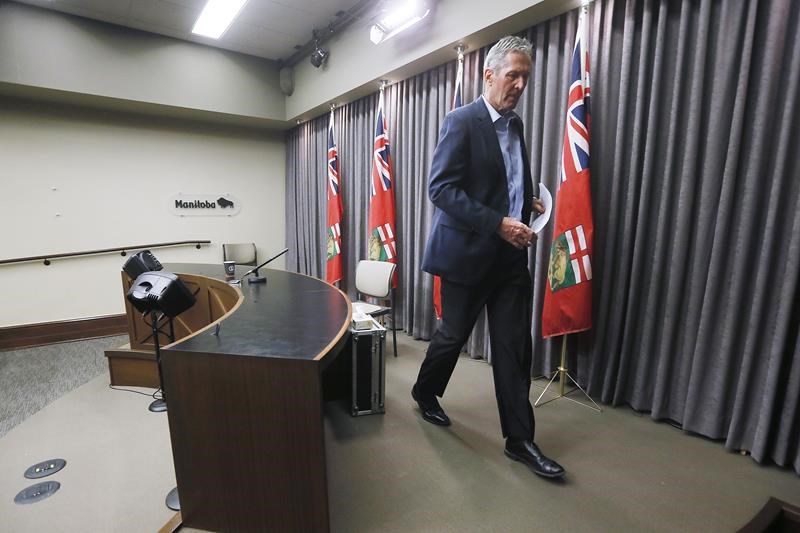 WINNIPEG — Manitobans will likely have to deal with strict COVID-19 measures into the winter, Premier Brian Pallister warned Tuesday.

With daily case counts remaining high and intensive care capacity close to the limit, Pallister said some restrictions on public gatherings and business openings will have to continue beyond Friday of next week, when the current orders are to expire.

“My gut feeling is that as we get into winter, it’s going to be critical that we continue with a high level of restrictions for some time,” Pallister said.

“COVID doesn’t give up, and we’re seeing that all across the country.”

Manitoba was leading all other provinces in the per-capita rate of new infections until recently, when Alberta surged ahead.

To try to bend the curve, the province enacted some of the strictest rules in the country: non-essential businesses have closed, public gatherings have been limited to five people and, with some exceptions for things like medical services, people are not allowed to have visitors in their home.

In-person religious services have also been banned — an order that has been met with a small measure of defiance and protests.

A church in Winnipeg held four drive-in services last weekend, where people remained in their vehicles while a pastor spoke on a stage. Outside of Steinbach in southeast Manitoba, a church has held in-person services, prompting police to block the parking lot last Sunday.

The number of new infections has plateaued and even dropped slightly in recent days — there were 282 new cases Tuesday — and people now testing positive are reporting fewer contacts with others.

That effect has yet to trickle through to the health-care system, however. A record 16 deaths were reported Tuesday and intensive care units remained close to full.

The government is already working on what restrictions might continue beyond next week, Roussin added, although he did not divulge details.

Manitoba has backed up its public health orders with added personnel, including a private security firm, to hand out fines.

The two churches that held services last weekend are being fined $5,000, Pallister said, and several individuals involved can expect fines of $1,296 each.

“It’s critical right now that we do not gather with people outside of our households,” Pallister said.

“And we need the full participation of all Manitobans in order for these strict public health measures to work.”