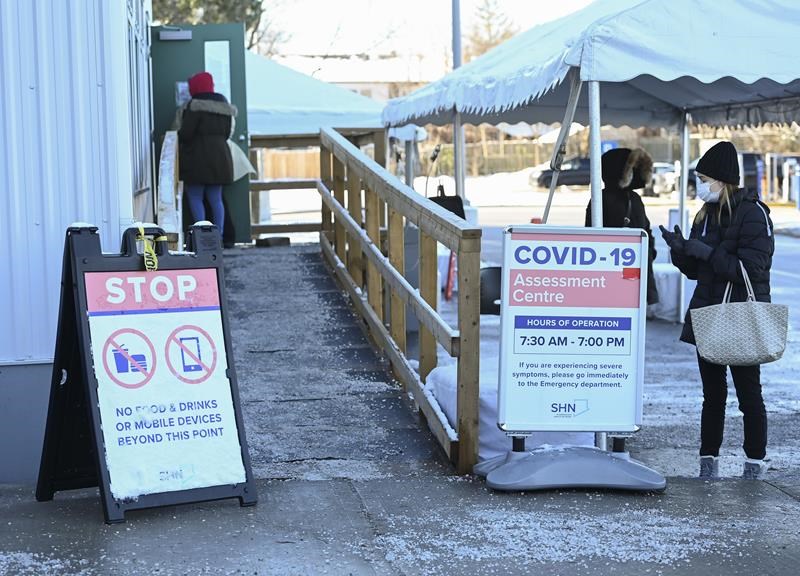 People line up at a COVID-19 assessment centre during the COVID-19 pandemic in Scarborough, Ont., on Wednesday, December 2, 2020. (THE CANADIAN PRESS/Nathan Denette)

Senior Health Canada officials said Thursday they could be just days away from approving a COVID-19 vaccine as many provinces reported increasing hospitalizations and Quebec cancelled plans to allow gatherings over the Christmas holidays.

Chief medical adviser Dr. Supriya Sharma said final documents from the American drugmaker Pfizer are expected Friday. They are to include which production lots of the vaccine will be shipped to Canada and when.

Sharma wouldn’t put an exact date on approval or delivery, but said once the “key information” is delivered from Pfizer, she will be able to tell Canadians the news they have been longing to hear.

Moderna’s vaccine is expected to receive approval soon after.

The supply will initially be limited to about three million people. Dr. Howard Njoo, Canada’s deputy chief public health officer, said Thursday they are targeting priority groups that will most benefit from an earlier vaccine while reducing the spread of the virus.

“In a country as geographically large and diverse as ours, we are facing some logistical complexities,” he said, including reaching remote communities and co-ordinating between various levels of government.

The Canadian Armed Forces received formal orders last week to start planning for the distribution of COVID-19 in the most ambitious and complex vaccine rollout in the country’s history. Maj.-Gen. Dany Fortin, who is leading the country’s distribution effort, said the speed, scope and scale of this plan makes it unique.

A planning directive for Operation Vector includes preparations on vaccine-storage facilities and notes the possibility of flying doses on short notice from Spain, Germany and the U.S.

Many health officials in regions across the country have reported increasing pressures on hospitals and front-line workers during the second wave of the pandemic as they prepare for upcoming distribution of the vaccine.

Premier Francois Legault announced Quebec will no longer go forward with a plan to permit multi-household gatherings of up to 10 people over four days during the holidays.

Hospitalizations declined slightly in that province to 737, but the number of people in the intensive care unit remained unchanged at 99 on Thursday.

Legault said it was not realistic to think the numbers will go down sufficiently by Christmas.

Ontario reported 666 people were in hospital Thursday with COVID-19, with 195 in intensive care — a 34 per cent increase from the week before. There were 1,824 new cases and 14 more deaths due to the virus.

Dr. David Williams, Ontario’s chief medical officer of health, said there is a team working with the federal government on vaccine distribution.

“It’s still early day. We are going to start this process as soon as we can to make strides,” he said. “Everything we do is a step in the right direction.”

The seven-day rolling average of new cases nationally is 6,044.

The Prairie provinces have been a hot spot for COVID-19 in recent weeks. Saskatchewan and Alberta recently brought in more restrictions, with the latter making a request to Ottawa and the Canadian Red Cross for field hospitals to help with the surge.

Alberta recorded 1,854 new infections Thursday — a new daily record. There were 511 COVID-19 patients in hospital, including 97 in intensive care.

Manitoba reported 367 new infections and 12 additional deaths. Premier Brian Pallister called for more clarity in Ottawa’s vaccination rollout, specifically when it comes to how doses will distributed on First Nations.

The premier also expressed frustration with people who still don’t believe the novel coronavirus is a threat, even though more than 250 Manitobans died from the virus in November alone.

Dr. Bonnie Henry, British Columbia’s provincial health officer, announced 694 new cases of COVID-19 on Thursday and 12 additional deaths as she outlined the early details of the province’s plan for immunization.

Seniors in long-term care homes and hospitals will be the first to get immunized, she said, but more details on the plan won’t come out until next week.

Henry said health-care workers are tired from the pandemic and it’s important to get through the next few months before vaccines are available.

“We know that our long-term care homes, in particular, are most vulnerable, and we know right now it’s the biggest challenge that we are facing,” she said.

— With files from Mia Rabson