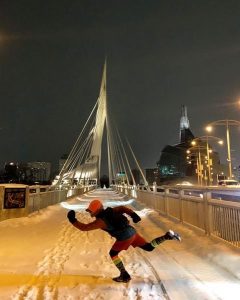 Junel Malapad, a Winnipeg runner who runs a Facebook page where people share their exercise routines is seen on the Esplanade Riel in Winnipeg in this undated handout photo. (THE CANADIAN PRESS/HO-Kareen Rak)

WINNIPEG — Finding a way to get outdoors and connect — safely — with friends and family has already been a challenge during the COVID-19 pandemic.

Now, with the thermometer dropping and winter at the door, it can be even harder.

But people are finding creative ways to avoid cabin fever, get some fresh air and stay in touch with others, even if only virtually.

“When we get together to run outside with a person or a group, there’s conversation … and the vibe is really great. So maybe people are looking for something like that right now,” says Junel Malapad, a Winnipeg runner who, for years, has used his seemingly boundless energy to organize fundraising events for mental health, motivate fellow runners and volunteer at races.

Malapad and a couple of friends have led a Facebook group that was, until recently, focused on running. The pandemic prompted a change. The group is now called Keep Moving, Sharing and Inspiring. It invites people to post stories and photos of exercises they do, scenery they see and more. Its membership has grown to more than 900.

The group’s aim is not only to keep people motivated to stay active, but also to help re-create some of the social aspect of large in-person running groups and races that are not permitted under Manitoba’s current public-health orders.

“Right now with the pandemic, it’s harder to share these things, so this group is really good for that,” Malapad says.

Creative COVID-friendly solutions are not just for athletes.

In Calgary, city hall is allowing groups to reserve fire pits for free in parks. The idea is to give people an easy way to get outdoors during the long winter.

“We really wanted to give people a mental-health break from being sort of cooped up inside,” said Jennifer Thompson, the city’s acting manager of arts and culture.

People are advised to only gather around fire pits with others in their bubble and to remain two metres apart or wear masks. The program, brought in without much fanfare, was so popular that the city had to put a pause on bookings after getting about 100 requests a day.

In Montreal, 25 outdoor “winter stations” are being set up. They will have seating, lighting and art installations and will be close to shopping areas. The aim is to both encourage people to shop locally and give them a spot to sit outdoors while taking in art from different architects and designers.

Montreal Mayor Valerie Plante has pointed to the artistic lighting at the stations as a form of therapy against the winter darkness.

Back in Winnipeg, fitness coach Lindsay Somers is planning to adapt her running clubs to Manitoba’s changing COVID-19 restrictions.

She normally has about 50 people meeting up and getting fit in downtown Winnipeg. When the province started restricting public gatherings — first with limits of 10, then five — she broke her group up into small cohorts that ran far apart from each other.

For January, Somers is looking at innovative ways to have people run separately while still, in many ways, together.

She is mapping out circular loops for her running clients. She plans to give them a time at which to start but not give them a starting point. There will be buttons so that runners can identify each other.

“When we cross paths with other runners, we can give them a wave, give them some support, give them a cheer. It helps us to feel like we’re part of something bigger.”

Members of the run club will also have the option of talking on their phones with other runners, via headphones, while on the go. It’s all about connecting, even in a pandemic.

“There’s something about having a shared experience at the same time, which is something that we don’t really get to have now,” Somers says.