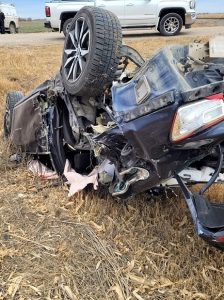 A vehicle involved in a collision with a freight train near Winkler, Man., is shown in this handout photo. (RCMP HANDOUT)

WINKLER, Man. — RCMP in southern Manitoba are investigating two separate collisions involving two vehicles and the same freight train that happened within a few hours of each other.

Police say in the first crash a vehicle collided with a Canadian Pacific Railway train Tuesday afternoon at an uncontrolled intersection east of Winkler.

Investigators say the vehicle rolled several times and the 53-year-old man who was driving was taken to hospital with non-life-threatening injuries.

Two hours later, RCMP responded to the second collision involving another vehicle and the train at an intersection west of Winkler.

RCMP say the vehicle was pushed into the ditch, and the driver, a 19-year-old woman, was treated and released at the scene.

Police say the Transportation Safety Board has been notified and Canadian Pacific Railway Police are also investigating.

“Many railroad tracks in Manitoba go through rural areas and crossroads at uncontrolled intersections,” Cpl. Julie Courchaine of the Manitoba RCMP said Wednesday in a release.

“Drivers must be cautious and aware of their surroundings. When a train is coming, vehicles should stop at least four-and-a-half metres away from the rails and wait until the train is completely clear before proceeding.”