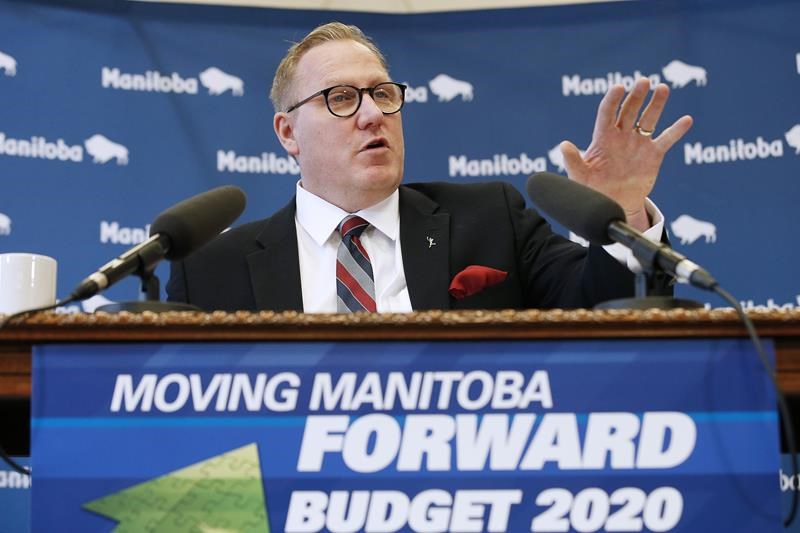 Manitoba Finance Minister Scott Fielding speaks to media at a press conference before the provincial budget is read at the Manitoba Legislature in Winnipeg, Wednesday, March 11, 2020. (THE CANADIAN PRESS/John Woods)

WINNIPEG — The Manitoba government is projecting a smaller-than-expected deficit, although it is still forecast to be twice as large as the province’s previous record.

A budget update released Thursday predicts the fallout from the COVID-19 pandemic will result in a deficit of just over $2 billion for the fiscal year that ends in March.

That is $900 million lower than the last deficit estimate in September. The change is due primarily to $648 million in federal COVID-19 relief from programs Ottawa announced in recent months for hospitals, schools, businesses and other entities.

The Progressive Conservative government says its own spending on pandemic-related programs in areas such as health care and business supports are the main factor in the deficit.

“We’re tracking for a $2-billion deficit. That is the highest … in Manitoba’s history,” Finance Minister Scott Fielding said. The previous record-high was just under $1 billion following severe flooding in 2011.

A slower economy has resulted in lower income and sales tax revenues, and money from casinos dropped when they had to shut down under COVID-19 restrictions.

Premier Brian Pallister said the red ink is likely to continue beyond the end of the fiscal year.

“COVID could last a lot longer than we thought,” Pallister said.

“I think it’s a question of spreading out the deficit, probably, over a longer period rather than just in one fiscal (year).”

The Opposition New Democrats said the government should be spending more to help those affected by the pandemic, including businesses owners who have had to close their doors under public-health orders. The NDP pointed to hundreds of millions of dollars saved up in the province’s fiscal stabilization account, commonly called the rainy-day fund.

“There are people who are losing their livelihoods, that have built businesses from scratch. And they’re seeing their dreams disappear on them overnight,” NDP finance critic Mark Wasyliw said.

“Where is their government when they need them?”

Manitoba has seen a long list of deficits going back to 2009 under the former NDP government. The provincial net debt more than doubled in the ensuing decade and two bond-rating agencies downgraded the province’s rating.

The Progressive Conservatives, elected on a promise to cut taxes and balance the books over two terms, recorded a razor-thin $5-million surplus in the last fiscal year just before the COVID-pandemic took hold.