A Pandemic, Economic Questions and Leadership Rumblings in Manitoba Politics 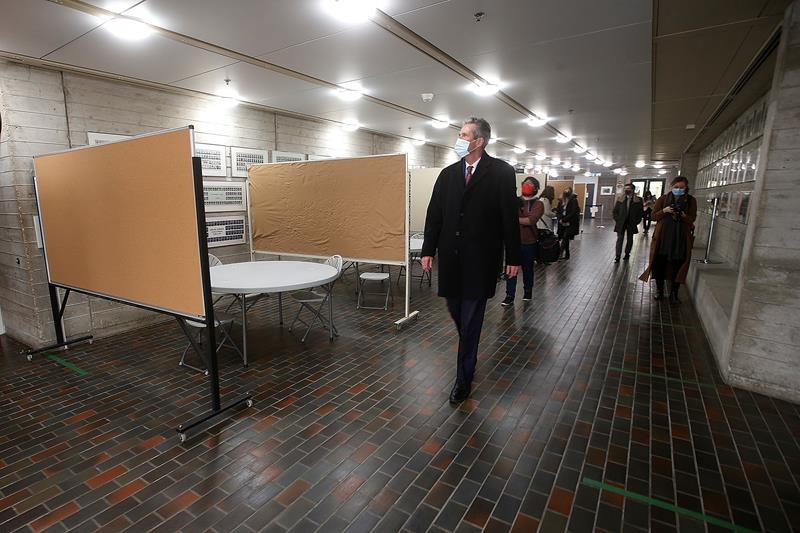 Brian Pallister, Premier of Manitoba, walks past the post-vaccination resting area at the COVID-19 vaccination clinic at the Health Sciences Centre in Winnipeg, Monday, December 14, 2020. (THE CANADIAN PRESS/John Woods)

WINNIPEG — The COVID-19 pandemic will shape Manitoba politics in many ways in 2021.

There will be an ongoing attempt to control outbreaks of the novel coronavirus and to keep hospitals from being overwhelmed. Decisions will need to be made about how many strict limits on business openings and public gatherings should remain to slow the spread of infection.

And there will be questions about whether Premier Brian Pallister can bounce back from low polling numbers and widespread criticism of the Progressive Conservative government’s response to a spike in cases in the late summer and fall.

“Pallister is well and truly the public face of the government’s response. He owns it,” Royce Koop, a professor of political studies at the University of Manitoba, said in reference to Pallister’s many news conferences on COVID-19.

“So when it hasn’t gone well, it’s been Pallister that’s kind of eaten it, entirely by himself.”

For many weeks in the fall, Manitoba led all other provinces in the per-capita rate of new infections. Wait times at testing sites were long and hospitals appeared to be in a scramble to open up more intensive care beds. Outbreaks erupted at personal care homes.

Pallister, in a year-end interview with The Canadian Press, pointed out his government was among the first to bring in low limits on public gatherings. And unlike other provinces in Central Canada and the West, Manitoba instituted mandatory self-isolation for travellers arriving from some other regions.

Still, the virus spread as people continued to mingle. Restaurants, bars and other businesses were open. By the end of October, the daily number of new cases jumped to more than 300 from less than 100.

“We weren’t ready for the spike that happened, almost spontaneously, in that early couple of weeks of November”, Pallister said.

The government closed bars and restaurants except for takeout and delivery and limited public gatherings even in private homes — first in Winnipeg and then across the province. The number of new daily cases started to drop a few weeks later. But by then Manitoba was already on the way to posting the second-highest per-capita death rate from COVID-19, behind Quebec.

The current set of public health orders, which includes a ban on most social gatherings in private homes and a shutdown of non-essential stores, is to expire Jan. 8. Pallister said the decision to force businesses to close is not an easy one.

“Many times, I notice that people who tell us we should have shut down the economy sooner don’t have to face the consequences of losing their job,” he said. “It’s hard to take a person and tell them they’re going to be unemployed for the not easily foreseeable future.”

Pallister has also signalled a possible cabinet shuffle soon that would add a second health minister to his inner circle to help share the workload of the pandemic.

There is also a decision to be made about his own future.

In the last election, Pallister promised to serve out a full term until the next provincial vote in October 2023. When asked if he still intends to do that, he would only say he will stay on until the pandemic is dealt with.

Koop said that signal will prompt any Tories with leadership aspirations to start organizing.

“They would have been doing that before (quietly) … but now that he’s said this outright, it’s much more of a green light to start moving in that direction.”

A recent poll by Probe Research suggested support for the Tories has fallen behind that of the NDP for the first time in years, most notably in Winnipeg, where most legislature seats are.

NDP Leader Wab Kinew said his party is focusing on putting forward an alternative vision to the government’s.