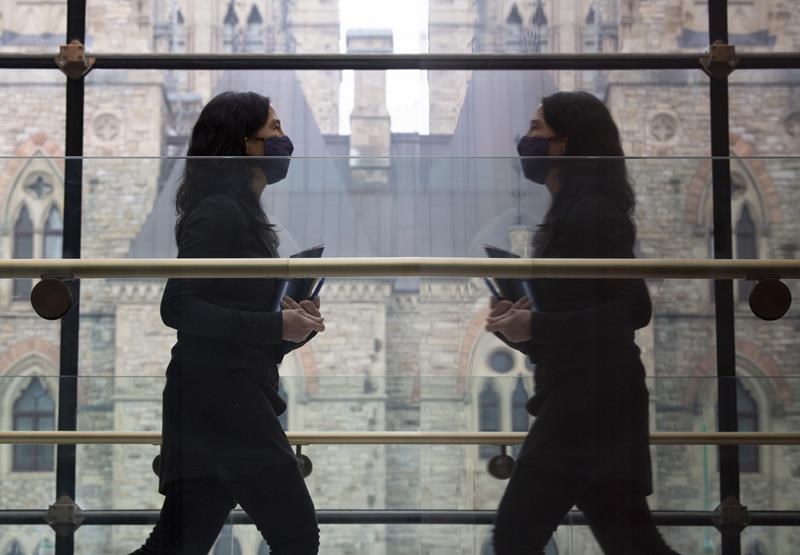 Chief public health officer Dr. Theresa Tam is reflected in a wall as she leaves a news conference Tuesday, Jan. 5, 2021 in Ottawa. (THE CANADIAN PRESS/Adrian Wyld)

OTTAWA — Canada is the latest country to investigate how to stretch vaccine doses as far as possible, as the COVID-19 pandemic continues to have tragic consequences all around the world.

Dr. Theresa Tam, Canada’s chief public health officer, said Tuesday she has asked the National Advisory Committee on Immunization to investigate whether it would be warranted to delay the second doses of a COVID-19 vaccine in a bid to get first doses to more people faster.

“This is a topic of, of course, active discussion,” Tam said at her regular Tuesday briefing on the COVID-19 pandemic in Canada.

The situation, she noted, is grim, with more than 7,500 new patients diagnosed every day, more than 77,700 people actively infected with it, and more than 4,000 people in the nation’s hospitals with it. Over the last week, an average of 122 Canadians have died of COVID-19 every day.

Tam said there is some promising evidence that single doses of vaccines designed to be given in two shots are effective for a while, but that evidence is limited. She stressed Canada remains committed to giving two doses of the vaccines but that she has asked the advisory committee to look at what is known about the matter, and what should be considered when deciding whether to adjust the dosing schedule.

Health Canada has approved two vaccines against COVID-19, and about 150,000 people have now been given at least one dose. On Monday, the first people began receiving their second doses of the Pfizer-BioNTech vaccine, 21 days after they received first doses on Dec. 14.

That schedule follows the advice of Pfizer and BioNTech, which said their vaccine is 95 per cent effective at preventing COVID-19 symptoms within seven days of receiving a second dose. The doses are to be administered 21 days apart.

U.S. biotech firm Moderna, whose vaccine was approved in Canada Dec. 23, calls for two doses to be given 28 days apart.

AstraZeneca’s vaccine, which has been approved in the United Kingdom but not yet in Canada, also requires a second dose after 28 days.

Several countries are now investigating or authorizing the delay of those second doses, to get more people vaccinated with first doses.

Denmark authorized a six-week delay. The U.K., which recorded a single-day record of 58,784 new cases Tuesday, is pushing that second dose back by 12 weeks for its two approved vaccines from Pfizer-BioNTech and AstraZeneca.

Germany is also investigating whether to delay the second dose.

Pfizer told The Canadian Press in a statement it doesn’t endorse a delayed-dose plan. While peer-reviewed reports on its vaccine’s clinical trial found the vaccine was about 52 per cent effective at preventing illness after one dose, most patients received the second dose after 21 days so there is no data analyzing how well one dose works beyond three weeks.

Moderna similarly said it can’t comment on whether its vaccine is effective outside the two-dose, 28-day schedule. Moderna said two equal doses given 28 days apart provided a stronger immune response than one double dose delivered in a single injection.

The World Health Organization said Tuesday delaying Pfizer’s second doses up to six weeks could be acceptable under exceptional circumstances.

The U.S. Food and Drug Administration said it is worth investigating the idea of delaying doses, or injecting half-doses, but that at the moment there is no evidence supporting the authorization of any changes.

Dr. David Fisman, an epidemiologist in Toronto, said there might be some evidence for delaying a second dose to six weeks, rather than 21 or 28 days.

“For many vaccines a second dose is given at six weeks and that works nicely,” he said, noting sometimes the “boost” from the second dose is actually better if it’s given a little later. He said he suspects the six-week window wasn’t used in the COVID-19 trials because this is a public health emergency.

“Right now we are vaccinating slower than we are getting doses, so it’s sort of a moot point in Canada,” he said.

Canada has received 424,050 Pfizer and Moderna vaccine doses thus far, but records currently show only about one-third have been injected.