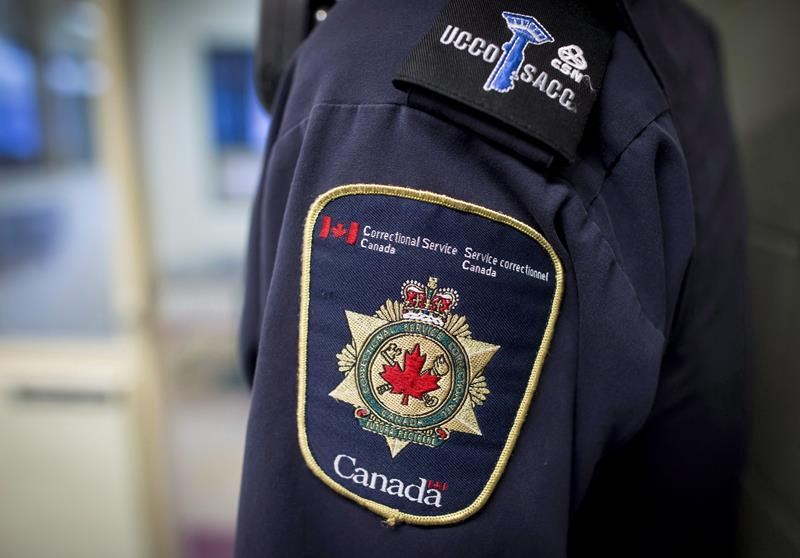 Patches are seen on the arm and shoulder of a corrections officer in the segregation unit at the Fraser Valley Institution for Women during a media tour, in Abbotsford, B.C., on Thursday, Oct. 26, 2017. (THE CANADIAN PRESS/Darryl Dyck)

OTTAWA — A union representing federal prison guards says vaccinating them against COVID-19 should be a priority, given their front-line role in correctional institutions.

Members should be inoculated at their workplaces as quickly as possible, said Jeff Wilkins, national president of the Union of Canadian Correctional Officers.

The call came Wednesday amid word from the union that the Correctional Service would begin vaccinating inmates this week.

In a statement late Wednesday, the Correctional Service said it expected to begin vaccinating “older, medically vulnerable federal inmates” Friday against COVID-19 as part of the first phase of the vaccine rollout, as recommended by the National Advisory Committee on Immunization.

About 600 inmates will get doses of the recently approved Moderna vaccine from the prison service during the initial phase and, as further supply becomes available, it will eventually be offered to all federal inmates, the statement said.

Under the Corrections and Conditional Release Act, the service has an obligation to provide essential health care to federally incarcerated inmates, it added.

The federal prison population varies but is typically about 14,000 people. The service reports that 1,149 federal inmates have tested positive for COVID-19 throughout the pandemic, and three have died of it. The prison system had 144 inmates with active cases as of Jan. 4.

The prison service said its staff will be vaccinated by their home provinces or territories, adding it is working closely with those jurisdictions to ensure access to the vaccine in accordance with the priority groups identified by the committee on immunization.

The statement did not specifically mention correctional officers but noted the prison service “has health care workers who provide close, direct care to inmates diagnosed with COVID-19.”

“We are working closely with provinces to ensure vaccines are prioritized for these workers in the first phase.”

Earlier Wednesday, Conservative public safety critic Shannon Stubbs accused federal officials of putting the health of inmates ahead of that of prison guards.

She said in a statement it is “outrageous that incarcerated criminals will receive vaccines before vulnerable seniors in long-term care homes, front-line health care workers, first responders and correctional officers.”

About 225 of the union’s more than 7,400 members have tested positive for COVID-19, Wilkins said Wednesday in an interview.

The prison service must recognize that officers have been working for months in institutions where physical distancing is difficult, Wilkins said.

Although the Correctional Service has a legal mandate to provide care to inmates it also has a responsibility to protect staff members from disease under the Canadian Labour Code, he added.

“First off, we need to make sure that we have a workforce available to to go into those workplaces that are seeing some significant outbreaks right now.”