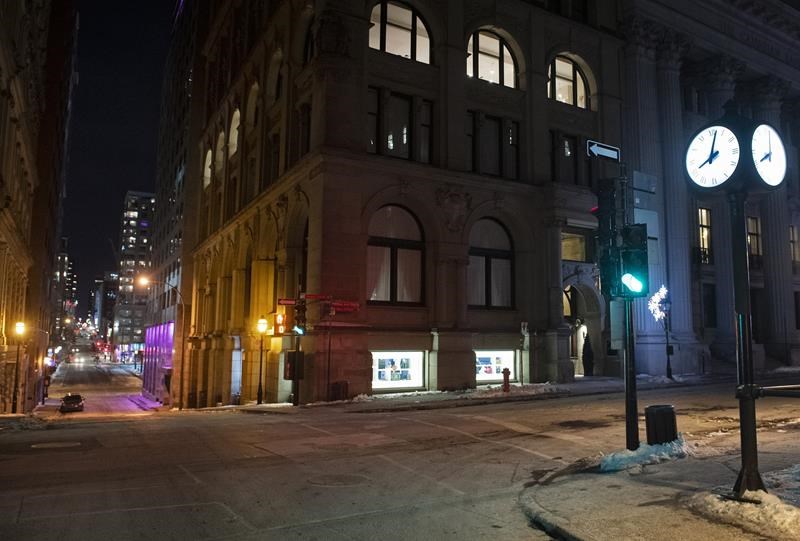 A clock shown shortly after 8 p.m on the corner of an empty street in Montreal, Saturday, January 9, 2021, as the COVID-19 pandemic continues in Canada and around the world. (THE CANADIAN PRESS/Graham Hughes)

COVID-19 numbers continued to soar in many parts of Canada on Saturday as a long-standing pandemic hot spot imposed the country’s strictest public health measures to date.

Quebec Premier Francois Legault announced earlier in the week that Quebecers would have to stay home from 8 p.m. to 5 a.m. for at least one month in an effort to prevent people from gathering in defiance of public health guidelines.

The provincewide curfew took effect on Saturday evening and will be in effect until at least Feb. 8. The new rules apply to everyone except essential workers, people walking their dogs and those on a short list of other exceptions, with violators facing fines of up to $6,000.

In a Facebook message, Legault said the province’s hospitals were approaching a “tipping point” that would see all but the most urgent treatments delayed.

He said the curfew would help stop “even the smallest” gatherings.

“It’s the sum of all these little infringements of the rules that feed the virus,” he wrote.

As the curfew took effect on Saturday evening, police lined the streets of Montreal’s Plateau district and quickly broke up a small protest there.

There was no immediate word on whether police issued fines or were set to lay charges.

Another protest in Quebec City resulted in fines of over $1,500 being issued to about 20 demonstrators, police said.

The province broke the 3,000-case mark for the first time Saturday, joining Ontario, which has recorded such numbers for weeks.

Quebec has logged 226,233 cases of the virus since the pandemic began, and has counted 8,647 deaths.

Ontario, meanwhile, has seen 211,837 cases — though more are currently active in that province than Quebec — and just shy of 5,000 deaths.

This week Ontario delayed the return to in-person classes in parts of the province to slow the spread of the virus, prompting the education minister to announce Saturday that more workers would be eligible for free child-care.

Stephen Lecce said RCMP officers, custodial and clerical education workers and postal staff would be among the expanded list of essential workers deemed eligible for the measure designed to help parents who need to work while their children attend classes remotely until at least Jan. 25.

His announcement came moments after the province recorded 3,443 new cases of COVID-19 in the past 24 hours, along with 40 related deaths.

Farther east, New Brunswick also reported one of the highest single-day increases since the onset of the pandemic, with 30 new cases of COVID-19 spread across the province.

Alberta, meanwhile, logged another 989 cases of the virus on Saturday, plus 31 deaths. More than 800 people were hospitalized in that province.

As of Saturday evening, the Public Health Agency of Canada’s national case tally stood at 652,473 since the onset of the pandemic. More than 83,000 remain active, and 16,833 people had died.

“With the current momentum of the epidemic and continued high rates of infection in many areas of the country, rapid accumulation of cases will continue until we can make significant progress in interrupting spread,” Dr. Theresa Tam wrote.

She urged Canadians to keep following public health advice to limit the spread of COVID-19 while the vaccination effort ramps up.