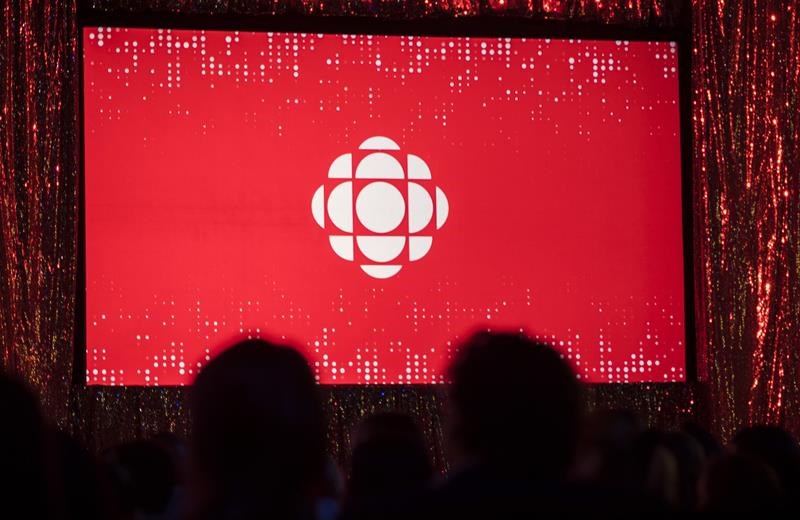 The CBC logo is projected onto a screen during the CBC’s annual upfront presentation at The Mattamy Athletic Centre in Toronto, Wednesday, May 29, 2019. (THE CANADIAN PRESS/Tijana Martin)

OTTAWA — Oversight and transparency took centre stage on Day 1 of a nearly three-week review of the Canadian Broadcasting Corp.’s broadcasting licences, as the rush to furnish digital content butts up against regulatory barriers.

The CBC is asking Canada’s telecommunications regulator to renew licences for its various English- and French-language audio and audiovisual programming services.

Under the public broadcaster’s application, that digital dexterity would leave it free of detailed financial reporting obligations around online content, such as the CBC Gem streaming platform and CBC Listen app.

“If we do not move with our audiences, we risk becoming dinosaurs on a melting ice cap,” Tait said at the virtual hearing Monday morning.

She is asking the CRTC to renew its licences for five years with slimmed-down regulatory scrutiny of its digital content compared to its radio and television programs.

“I know you don’t like expenditure-based requirements,” Scott said.

“But from the commission’s perspective, with greater regulatory flexibility there’s a greater requirement for accountability and transparency from the corporation, and that has to come in some manner through reporting.”

The CBC has already faced pushback for steps to commercialize its online fare.

In an open letter to the general public, they warned that a new marketing effort called Tandem will erode the integrity of CBC journalism, saying that paid content that resembles news is “insidious” and will “help advertisers trick Canadians.”

CBC management has insisted that editorial and advertising content would remain separate, and stressed a critical need to generate revenue amid big financial pressures.

The Friends of Canadian Broadcasting is recommending the CBC go a few steps further by following its radio service to become ad-free on television and online.

“They have also been very, very dodgy when it comes to transparency,” Daniel Bernhard, the group’s executive director, said of CBC management.

“It’s just an insane idea, that the Canadian public and our regulator have no business scrutinizing activities of the public broadcaster in the digital domain.”

Bernhard also called for more investment in local news as ad dollars fall away from traditional media and into the coffers of Google and Facebook, hollowing out regional journalism.

Seventy interveners are scheduled to begin presentations to the CRTC on Friday and continue over eight days until Jan. 26.

The Canadian Media Producers Association will make the first presentation. Others include the Canadian Olympic Committee, Quebecor Media Inc., Friends of Canadian Broadcasting and the Office of the Commissioner of Official Languages.

CBC’s response to the intervener presentations is scheduled for Jan. 27.