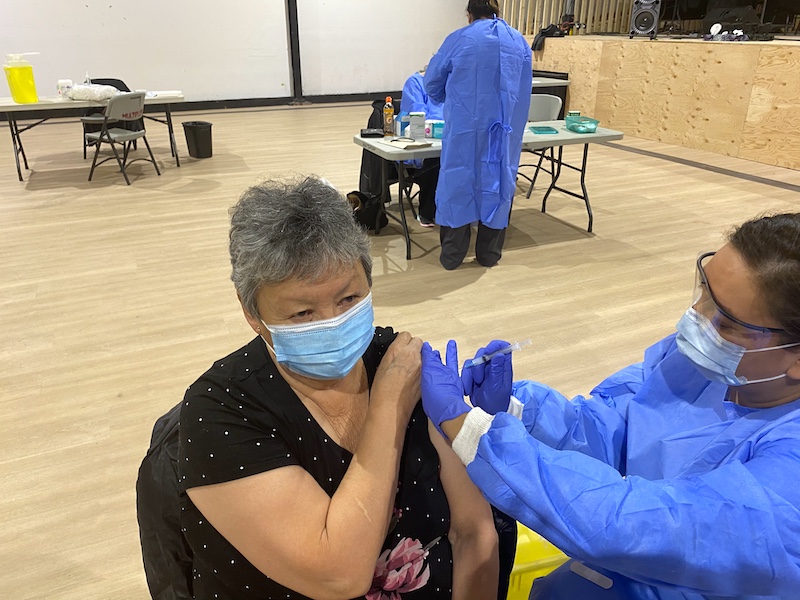 WINNIPEG — Vaccine distribution has begun on a handful of Manitoba reserves as a task force reports that 61 per cent of the people with active COVID-19 in the province are First Nations.

First Nations now account for 40 per cent of new infections while making up about 10 per cent of the overall Manitoba population.

Dr. Brent Roussin, the chief provincial public health officer, says there are unique challenges with the virus’ spread in remote and isolated communities.

There is less access to health care and alternative housing for people who need to isolate.

He says getting the vaccine out is a top priority.

About 5,300 doses of the Moderna vaccine were reserved for Indigenous people in Manitoba. It can be stored and transported more easily than the Pfizer-BioNTech vaccine.

The province said all 63 First Nations will receive a portion, but the first shipments are heading to communities with personal care homes. A second shipment of doses is expected by Feb. 23.

The vaccine began arriving in those First Nation communities last Thursday, including 240 doses in Norway House Cree Nation. The First Nation about 455 km north of Winnipeg is prioritizing the doses for personal care home staff, residents and elders who are over 70 years old.

Chief Larson Anderson said in a statement Monday that housing shortages, limited health care and underlying health issues among many community members could mean a rapid and devastating spread of the virus.

“This experience is like being part of a crew on a boat in the vast ocean. Sadly, the boat has many leaks and damages and is in constant need of repairs,” Anderson said. “The pandemic is like a massive storm that is battering the boat and making an already dangerous situation more critical.”

He credited the resilience of the community for keeping infections low – 48 people on the reserve have tested positive and none of the cases are currently active.

First Nations have been hit particularly hard by the pandemic during the second wave. While the number of daily infections in Manitoba has started to decrease the five-day test positivity rate amongst First Nations is 19 per cent for people who live on reserve and 16 per cent for those off reserve.

First Nations make up a larger proportion of people hospitalized, including 38 per cent of those in intensive care units. The median age of death for First Nations is 66, while it’s 83 for the rest of the Manitoba population.

Indigenous Services Canada said as of Friday there had been 10,217 confirmed positive COVID-19 in First Nations communities since the beginning of the pandemic. The department does not keep track of those living off reserve.

Peguis First Nation, about 190 kilometres north of Winnipeg, received 250 vaccine doses for residents and front-line workers at its senior centre. In a Facebook post Monday, the First Nation posted images of elders receiving a shot holding signs that said “First one. Thank you.” They were surrounded by health-care workers applauding.

Dr. Marcia Anderson, who is Cree-Anishinaabe and works with the First Nations response team, said in a video posted on the Assembly of Manitoba Chief’s Facebook page Friday that the benefits of getting the vaccine will outweigh the risk.

“Vaccination is a critical tool for us to employ in order to reduce the harms of COVID-19 that our communities are currently experiencing.”

This report by The Canadian Press was first published Jan. 11, 2021.