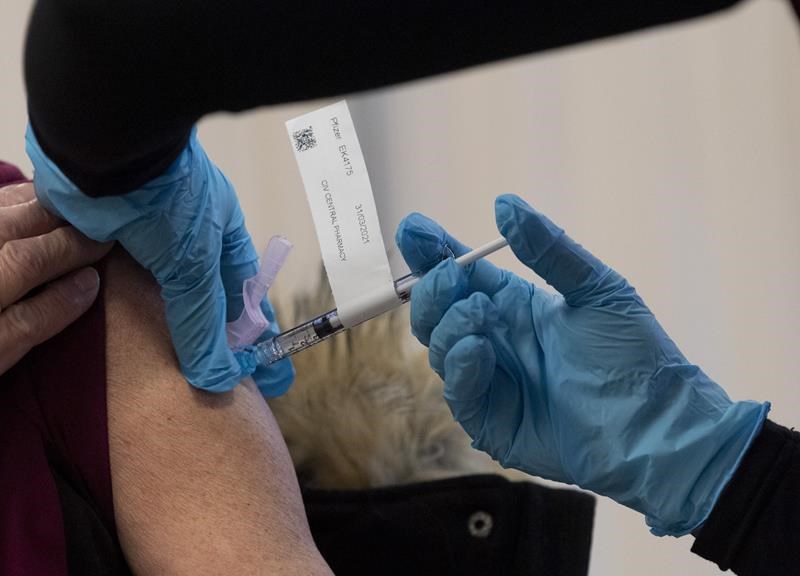 The Pfizer-BioNTech COVID-19 vaccine is administered to a personal support worker at the Ottawa Hospital Tuesday, December 15, 2020 in Ottawa. (THE CANADIAN PRESS/Adrian Wyld)

OTTAWA — Canada’s national panel of vaccine experts says a worsening pandemic and limited supplies of COVID-19 vaccines are good enough reasons to temporarily delay giving a second dose but would prefer the planned schedule is followed whenever possible.

In new recommendations issued late Tuesday, the National Advisory Committee on Immunization, or NACI, said every effort should be made to follow those dosing schedules. However it notes there can be exceptions, particularly when vaccine supplies are so hard to come by and the spread of the virus in a given jurisdiction is rapid.

“Model-based studies suggest population health benefits may be greater with a more balanced approach that does not withhold doses during early distribution in order to vaccinate more people as soon as possible, when early supplies of highly efficacious COVID-19 vaccines are constrained,” the advice reads.

Canada is getting 80 million doses of vaccine this year, enough to vaccinate everyone, but only six million doses are coming this winter, and another 20 million by the end of June. At two doses, on schedule, Canada could fully vaccinate about 13 million people by the summer, which is less than half the total population.

Those numbers could change if Canada approves more vaccines, including two currently being reviewed by Health Canada.

Delaying the second dose slightly could give first-dose protection to millions more Canadians sooner. About one per cent of Canadians have now received at least one dose of a COVID-19 vaccine.

The World Health Organization has said waiting up to six weeks is acceptable, and several countries are doing this or are looking at the idea as desperate health regions try to get vaccines into as many people as possible, even if it’s just one dose.

Saskatchewan and Manitoba both said Wednesday they would follow the 21- and 28-day schedules as recommended for now.

Dr. Bonnie Henry, B.C.’s chief public health officer, said this week that province can vaccinate another 150,000 vulnerable people by the end of March by using a 35-day dosing schedule.

Neither Pfizer nor Moderna endorse the idea of waiting for the second dose.

Quebec is facing a lawsuit from at least a dozen residents in a Montreal-area long-term care home because they didn’t get their second dose on time as promised.

NACI’s recommendations acknowledge the lack of evidence for delaying the doses, but said that with other vaccines, waiting longer than recommended to give a second dose hasn’t typically reduced the final level of immunity to a disease.

Dr. Supriya Sharma, Health Canada’s chief medical adviser, said last week determining the effectiveness of the vaccines after the first dose is hard because most of the patients involved got the second dose on time.

“The studies weren’t set up to do that,” she said. “So, you know, it’s kind of a back-of-the-envelope calculation.”

The trials suggested the first dose protected about half of Pfizer’s recipients and 80 per cent of Moderna’s but if those measurements aren’t taken until the full immunity period has kicked in, those numbers rose to 92 per cent for both vaccines.

But that data is based only one or two weeks of monitoring before the second dose was given, and there is almost no data to show whether that immunity began to wane at any point.

NACI’s recommendations say if the second dose is delayed those patients must be followed so more evidence of the impact can be attained.

It is also reminding people that even after being vaccinated they need to follow public health advice to wear masks and stay distanced from other people, because the vaccine protects against serious illness but it’s not yet known whether it prevents transmission of the virus to others.