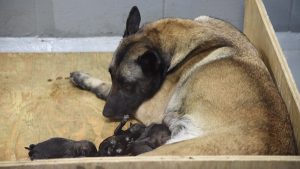 Winnipeg police have launched a fundraiser to drum up support for a future canine memorial.

The permanent memorial will be located at the Winnipeg Police Canine Unit Building on Durand Road and honour the service’s working dogs.

Since their introduction to the WPS in 1971, canines have helped officers in many operational units.

“Police service dogs are commonly used when searching for suspects who have fled a crime scene or hiding from police detection,” police said in a release. “These canines also possess other unique skills and capabilities when assisting police members.”

Construction on the memorial will begin later this year.