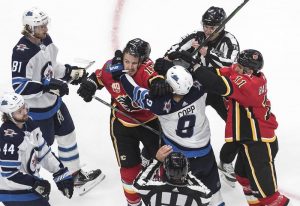 CALGARY — Recent history built heat into Thursday’s first game of the NHL season for the Calgary Flames and Winnipeg Jets.

The last NHL game the Jets played was a 4-0 loss Aug. 6 to the Flames, which ended Winnipeg’s post-season.

Calgary eliminated the Jets three games to one in last summer’s play-in round in Edmonton to advance to the first round of playoffs.

That series had its share of drama. The man at the centre of it, Calgary Flames forward Matthew Tkachuk, wouldn’t be surprised if there was some emotional carryover Thursday at Bell MTS Place.

“I’d say there probably will be,” Tkachuk said Wednesday before the Flames’ departure to Winnipeg.

“I expect them to not be happy with the way it went for them in the playoffs last year.

Jets alternate captain Mark Scheifele sustained a series-ending injury when he and Tkachuk tangled along the boards in the first period of Game 1 of the play-in series.

As Scheifele writhed in pain, Winnipeg’s bench directed a stream of expletives at Calgary’s.

Winnipeg captain Blake Wheeler summoned Tkachuk for retributive justice on the Flames’ forward’s next shift and the two traded punches.

Winnipeg head coach Paul Maurice accused Tkachuk of delivering a “dirty, filthy kick” to the back of Scheifele’s leg, which Tkachuk denied.

The absence of one of their top scorers hampered the Jets’ chances of beating Calgary and advancing to the playoffs.

The two Canadian teams had finished within a point of each other in the Western Conference.

Jets goaltender Connor Hellebuyck believes last summer’s disappointment at the hands of Calgary should fuel the Jets on Thursday.

“We got beat in that series and I’m still bitter about it until this day because I want to win,” Winnipeg’s goaltender said.

“They ruined our chances at a Stanley Cup, so for me personally, I’m going to use it as motivation.

“They’re a good team, so hats off, they played a good series, but I think it would be crazy for us not to use it to try and get a little jump energy-wise.”

The COVID-19 pandemic shortened the regular season, in which the NHL’s seven Canadian clubs face only each other in the “Scotiabank NHL North” division.

Calgary and Winnipeg will meet nine times, including two stretches of three games in four days.

Tkachuk didn’t know if he will get extra attention from the Jets in their season-opener.

“I don’t think so. Depends, probably, on who you ask,” the winger said.

“I’m expecting to go in there and whatever happens, happens. I’m just excited to get back playing and I expect them to be fired up and not happy with the way things went for them over the summer.

“I expect it to be a very intense, hard-fought game.”