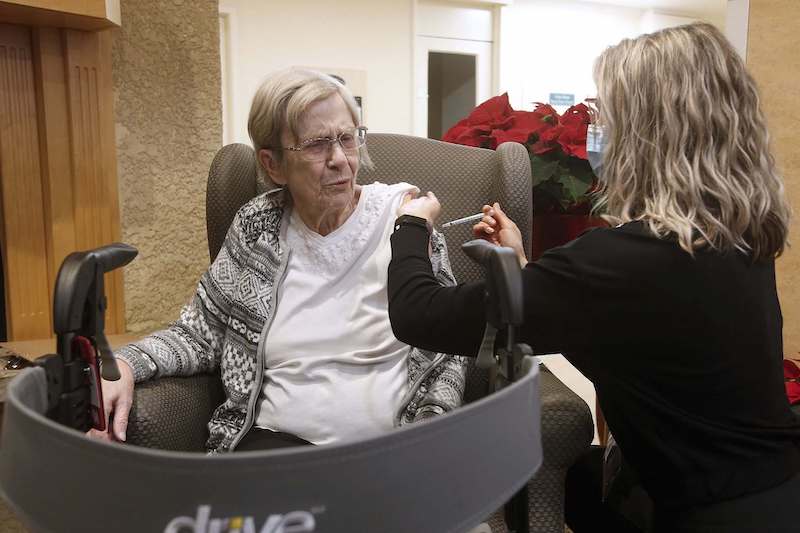 Jessi Bittner, a paramedic, inoculates Margaret Watson, 94, a resident at Oakview Place Long Term Care Residence, with her COVID-19 vaccine in the Winnipeg care home, Monday, January 11, 2021. Watson was the first member of the public to receive the vaccine in Winnipeg. (THE CANADIAN PRESS/John Woods)

WINNIPEG — Manitoba is pausing new COVID-19 vaccine appointments due to a shortage of the Pfizer vaccine.

Federal Procurement Minister Anita Anand announced Friday a global shortage of the Pfizer-BioNTech vaccine will impact Canada’s supply. Shortly after, Manitoba officials said they had anticipated these types of issues could arise, and the Vaccine Implementation Task Force is prepared to implement contingency plans if necessary.

“This could include the cancellation of future appointments depending on the duration and size of the supply interruption,” the province said

Dr. Joss Reimer, medical lead and official spokesperson for the province’s COVID-19 vaccine taskforce, announced on Twitter Friday afternoon that new vaccine appointments will be paused. Existing appointments for health-care workers will continue to be honoured.

We are pausing new vaccine appointments due to Pfizer supply disruptions announced today. @MBGov’s current inventory will be used to complete previously-scheduled first and second dose appointments. We anticipated these issues and have contingency plans in place. (1/3)

“Current inventory will be used to complete previously-scheduled first and second dose appointments,” the province said on its website.

“Manitoba anticipated these issues and has contingency plans in place.”

The delayed shipment means the second super-site in Brandon will significantly scale back operations shortly after opening on Monday, January 18 and the Thompson Vaxport will not open as soon as expected.

Manitoba had expected to receive additional shipments of vaccine next week, including 9,360 doses of the Pfizer vaccine, based on six doses per vial, and 7,400 doses of the Moderna vaccine.

To date, 13,539 doses of vaccine have been administered, including 11,401 first doses and 2,138 second doses. A total of 281 personal care home residents have been immunized and the province plans to have all residents in PCHs inoculated by February 8.